3 Lessons On Leadership From An Arctic Explorer 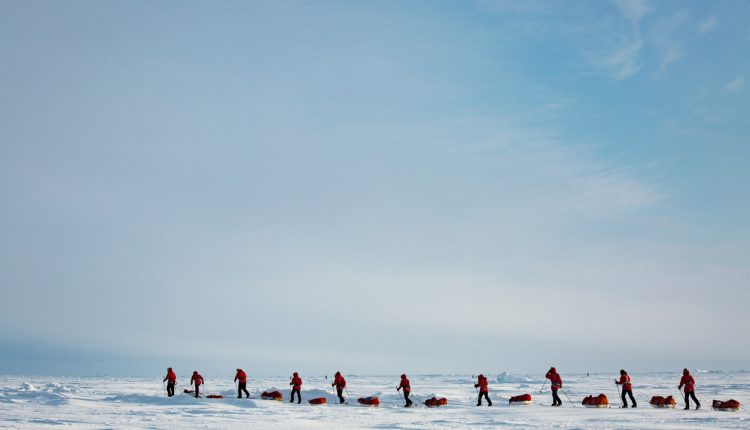 Imagine the scenario. It’s minus forty degrees and the wind is blowing straight into your face. All you can see for miles around is whiteness. It’s a struggle to keep going, and your team has already been skiing in these conditions for eight hours. You feel physically and mentally exhausted, and there is still another hour to go before you can all stop for the day. It’s just a relentless slog.

Hostile environments like the Arctic are where I’ve observed people showing fear and apprehension as well as determination and fortitude. And when you are the leader, you have the responsibility to encourage, inspire or even cajole your team to keep going – even when they seem to have no energy, or maybe desire, to continue. What I have learned is the importance of having a bigger purpose.  But it’s not enough just for the leader to be inspired by something greater, you must also instil that belief into others.

1. The pull of purpose

Simon Sinek, whose TED talk is one of the most popular of all time, uses his Golden Circle model to put ‘why’ at the heart of the message. ‘Why’ is the purpose, the cause or belief, and the very reason for the existence of the organisation or a project. On one of my polar expeditions crossing the Greenland Ice Cap – we skied over 350 miles, dragging sledges for twelve hours a day for almost a month. Whilst our overall purpose was to explore the unknown – each of us had our own ‘why’ that drove us on too.  For one man it was to take amazing photographs that would capture a powerful story, and for me, it was to use the experience as a case study into what makes a high-performing team.

As well as having the group purpose – in other words, the shared ‘why’ that we all believed in, it was important for each of us to understand the personal motivation of the others in the team.  I think a leader needs to appreciate why the others in their team show up every day at work – and how that personal motivation connects with the bigger purpose of the business. I learned in the Arctic that the job of the leader is to communicate the overall purpose and make those connections for each person in the team.

The Arctic is also a place where I’ve needed to trust my team. On my first expedition to the Magnetic North Pole in 1996, the leader encouraged each of us in the team to offer our ideas. Every day he devolved responsibility for the pace of skiing to a different group of four people. These groups consisted of one experienced adventurer and three novices. On the first day, Group A’s strategy was for us all to ski at a brisk pace and try to ensure that we kept going at that pace the whole day. At the end of the day, they calculated we had travelled 13 miles. David the leader congratulated them on their result and then passed the map and global positioning system (GPS) to the second group.

The next day, Group B’s discussions yielded a different plan. They asked us all to maintain a slow even pace for the entire day. At first, people complained about the cold, but once we warmed up, we found that we were able to maintain this pace for longer. We achieved 14 miles that day, which spurred Group C to want to improve on that result. David’s decision to trust the team even though they had no previous experience in this environment, and to delegate the leadership to individual groups each day, provided an opportunity for coopetition – a combination of cooperation, and competition to bring out everyone’s best ideas without any fear of repercussions if they got it wrong.

3. Vulnerability does not equal weakness

You might think a hostile environment like the Arctic is not where you want to show vulnerability, but I discovered it was – because it builds empathy. To know the capabilities of a team, everyone must understand their own strengths and weaknesses. This point was reinforced to me in Greenland. As our expedition was completely unsupported, we were all dragging sledges weighing over 60kg each that contained all the food, fuel and equipment needed to survive for a month.

After a few days, it became clear that there were varying skiing abilities in the team, and I was the slowest. What was most frustrating was I had been recruited as the one with the most experience in polar expeditions among the team.  After much discussion about the speed, we were all skiing at, I realised that I had to face up to my weakness and relinquish some of the items in my sledge to another. But I realised that in doing so I would be helping the entire team to succeed because I would be able to ski faster.

Showing vulnerability was a tough lesson for me, but one that really helped us become closer as a team. It takes courage as a leader to admit your weaknesses to your team and to ask for help, but it is easier if you have cultivated a climate of trust. Leaders who have a transformational style of leadership can do this by listening to their team, being prepared to delegate and seeking solutions to problems, not seeking to blame.

The Arctic is an extreme environment and the price for failure can be death. The stakes may not be so high in the world of business, but for any leader keen to get the best from a team, adopting a transformational style of leadership will certainly go a long way to helping everyone to succeed.

About the author: Sue Stockdale is an executive coach for CEOs and business leaders, the first British woman to ski to the Magnetic North Pole and the author of EXPLORE: A Life of Adventure, published by Albert Bridge Books, priced at £8.99.