Who Is Sara Blakely?

Sara Blakely — born February 1971 — is an American businesswoman and philanthropist. Despite having no experience in fashion, retail, or business leadership, Sara Blakely founded the now famed shapewear company Spanx in 2000, having accidentally thought up the idea while attempting to look her best in a pair of white trousers. In 2012, Blakely was crowned the youngest self-made billionaire by Forbes. Today, at 50, her net worth sits at an impressive $1.2 billion following a substantial deal with private equity giant Blackstone.

In 2006, Blakely established the Spanx by Sara Blakely Foundation, which supports women through entrepreneurship, education, and the arts. She has donated to the Oprah Winfrey Leadership Academy for Girls and, in 2013, became the first woman to join “The Giving Pledge”, a movement founded by Bill and Melinda Gates and Warren Buffet through which some of the world’s wealthiest people have pledged at least half of their overall fortune to charity.

Blakely came up with the idea for Spanx in the late 1990s when she was just 27 years old and working as a salesperson, selling fax machines door to door. The job required her to wear tights and she quickly became infuriated by the seam of the garment. Around this time, she was invited to a party and wanted to look her best in a white pair of trousers. She took a pair of scissors and cut the feet off of a pair of tights. She loved the way the new undergarment made her look and spent the next two years and $5,000 of her savings travelling to numerous clothing manufacturing plants up and down North Carolina in the name of research. Before her 30th birthday, Blakely made the very first prototype for what would soon after become Spanx.

The Growth And Success Of The Spanx Brand 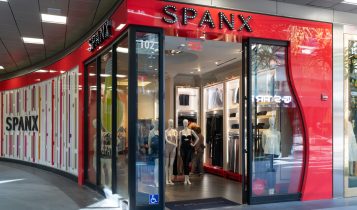 Sara Blakely has grown Spanx into a household brand that is currently worth an estimated $1.2 billion. From its very first day in business, Spanx was profitable, generating $4 million in its first year and a further $10 million in its second year. Across its now 20+ year history, Spanx has hit several major milestones:

After launching Spanx, Blakely sent a selection of her products to The Oprah Winfrey Show and the brand came to be featured in “Oprah’s Favourite Things”. This milestone helped the brand take off and provided Blakely with the opportunity to work on Spanx full-time from 2000 onward.

In 2001, Blakely made a deal with TV shopping channel QVC which helped to boost sales further still and expanded the shapewear brand’s market footprint.

Blakely first met the Virgin Group Richard Branson when she was cast on his reality TV show, The Rebel Billionaire. Branson donated $750,000 to Blakely following her appearance on his show to help start the “Spanx by Sara Blakely Foundation’”, which Blakely went on to found in 2006.

2012: Blakely Appeared On The Cover Of Forbes

Forbes touted Blakely as the youngest self-made female billionaire in 2012. “Today Spanx is to slimming undergarments what Kleenex is to tissues,” the business magazine wrote.

2021: Blakely Sells The Majority Of Spanx To Blackstone

Recently, Blakely has regained her billionaire status following a deal to sell the majority of her shapewear company to private equity giant Blackstone. Despite the colossal success of Spanx, its growth had been hindered by the pandemic as well as increasing market competition. Turning to her Instagram, Bakely said, “People have asked me for 20 years, ‘When will you sell Spanx?’ And for 20 years I would say…‘I’ll just know.’ Well that day is today. I will remain a significant shareholder and continue to help the business fulfill its greatest potential, as well as continue to fulfill my greatest passion—elevating women.”

Starting with nothing but $5,000 and the need to resolve an inconvenience, Blakely has built Spanx into a household brand that is stocked widely across the world and used religiously by many women. “Everybody has a multimillion-dollar idea inside them,” Blakely says. “Edison said, ‘Genius is one percent inspiration and 99 percent perspiration.’ The same holds true for innovation, invention, and entrepreneurship.”