Why EQ is Just as Valuable as IQ

Many of us have experienced a moment that takes us by surprise and reshapes how we approach our working lives. Graeme McCracken’s was courtesy of a throwaway remark during his colleague’s internal review. 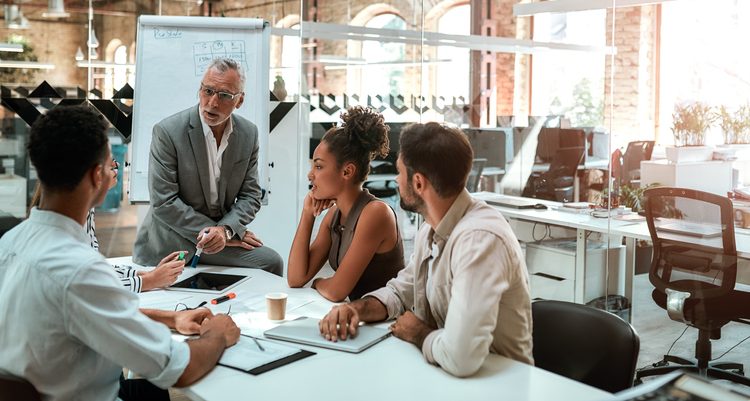 What I expected to be a standard meeting ended up being a pivotal moment in my career. I’d never considered that how I look – I’m a six-foot-plus Scot – impacts how people see me; it turns out appearances can be intimidating.

That one remark brought into sharp focus my perception of myself as an open and empathetic boss. Self-perception is not just a personal issue, it can be a business growth issue too. According to the 2016 Empathy Index, the ten businesses ranked most empathetic generated on average 50% more revenue.

It’s a surprising finding for many people of my age. The workplace culture we experienced early on in our careers might – charitably – have been described as hierarchical. Those days are gone. Today’s workplace is defined by a generation for whom collaboration is key, and that, combined with an ever-evolving digital transformation across all sectors, has flattened the leader-follower pyramid.

Now business leaders have to listen more than they talk. But this doesn’t mean employees have stopped feeling nervous about their bosses.

A recent study of 4,000 senior leaders, conducted by Hult Business School, found that 75% of respondents felt it was unlikely their staff would find them ‘scary’. Yet, that same research also revealed staff are still hesitant about engaging directly with their boss.

This can hurt a business. The worst-case scenario is staff churn, and the loss of talent and skills can have a knock-on effect on client relationships. Moreover, any investment in that person’s development is most likely going to end up with a competitor. And when staff don’t feel they have a direct line to the senior team, good ideas and opportunities are missed.

In the contemporary workplace then, emotional intelligence is as valuable a leadership quality as intellect. This goes for any firm and in any sector. It’s certainly the case in a business like mine, which is entrenched in data and cognitive intelligence. For us, as with most businesses, growth is driven by people as much as tech.

I’ve found that trust, respect and kindness are bigger business accelerators than a three-line whip. People buy into people. You’re always instinctively drawn to those you trust and whose values you share – that’s true both internally and externally.

That said, trust is a two-way street. Business leaders need to trust in the expertise of their teams to get on with it and achieve their objectives without unnecessary interference. At the same time, staff need to buy-in to their leader’s strategic vision. In practice, this means bosses need to know when to step back and when it’s appropriate to nudge someone in the right direction, without being overbearing.

Put simply, business leaders are the stabilisers that keep the bicycle upright; they cannot be the cyclist powering it. Microsoft’s CEO Satya Nadella summed this up succinctly in an interview with USA Today when he said the boss’ role is “not to freak people out, but to give them air cover to solve the real problem.”

Microsoft’s CEO Satya Nadella summed this up succinctly in an interview with USA Today when he said the boss’ role is “not to freak people out, but to give them air cover to solve the real problem.”

Delegation can feel counter-intuitive. Letting go isn’t easy (and I speak from experience). But with the right structures in place, empowering your colleagues will have a much more positive impact on the bottom line than micromanaging them.

Business leaders might do well to think about how it was when they first stepped on to the career ladder: enthusiastic, full of ideas and drive. All those qualities can be quickly undermined if they aren’t nurtured. This generation – and arguably those that follow it – expect to be enabled and encouraged to explore their potential. So, it makes sense to empower your best and brightest, so they unlock their own talents.

Moreover, it’s the right thing to do. Kindness and empathy are important facets of EQ – soft skills that have never been so important to our working lives than in the current challenging circumstances.

None of this is to say that empathetic leadership prevents you from making your teams a little uncomfortable. Pushing people beyond the limits they place on themselves (within reason) is healthy for their careers and the business. EQ helps to guide you so you know when and how far to push, ensuring they understand why you’re doing so and reassuring them you also hold the safety net.

It’s heartening to see empathy is rising up the agenda for business leaders. In 2017, research by businessolver showed 57% of CEOs felt workplaces needed more empathy. Last year, that number grew to 72% of the CEOs surveyed. The message is getting through that empathetic leadership is actually business-critical.

Modern leadership is characterised by demonstrating trust and encouraging inclusivity. That means having the courage to let go of controlling instincts and encouraging leadership at all levels throughout the organisation. I haven’t had to change who I am to be a better boss – leading with EQ as well as IQ has meant that I’ve developed more awareness, of others, as well as self.