How Impostor Syndrome Is Holding You and Your Business Back

Even the most renowned business leaders in the world are prone to feeling like frauds. How can you keep this from impacting your health and success? 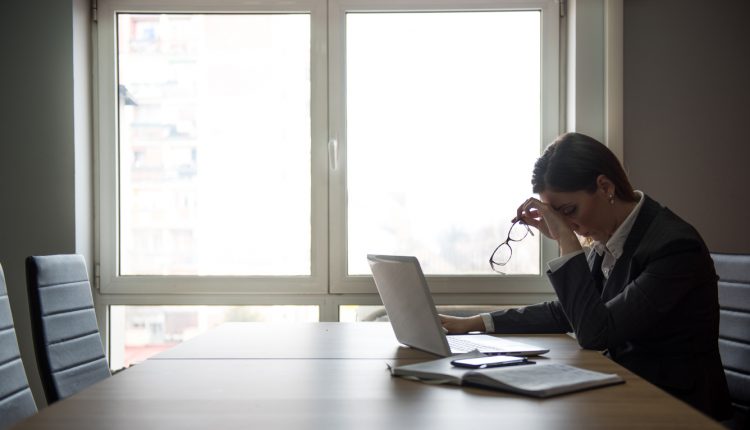 Peter Ryding, founder of VIC (your Virtual Interactive Coach) and award winning CEO Mentor, explains what impostor syndrome is and how it can be overcome.

Impostor syndrome, the sickening feeling that you are winging it and could get found out any minute, affects people at all levels. Counter-intuitively, it is more common the more successful you become. In my experience as a serial turnaround CEO and a master coach and mentor to CEOs for the last 20 years, I know that 85% of CEOs admit to suffering from it and the other 15% are hiding it. In addition, it affects 80% of their directors and over 40% of all their employees.

Famously, Michelle Obama and Sheryl Sandberg – the top economics student at Harvard, the COO of the biggest social network worldwide and the 12th wealthiest self-made woman in America – revealed their impostor insecurities and even Einstein is reputed to have suffered. No wonder it is so prevalent!

In 2015, a study in the Harvard Business Review asked CEOs to reveal their most deep-seated fears. The clear front runner was the fear of “being found to be incompetent”.

Statistically, women experience impostor syndrome more than men. A 2019 report by Access Commercial Finance found two-thirds of women had experienced feeling like a fraud in the previous 12 months and only half of men. Impostor feelings are a likely contributor to women’s under-representation at senior levels by creating powerful self-limiting beliefs. This is glaringly true in financial services where only 9% of top investment bankers in London are women.

A 2019 report by Access Commercial Finance found two-thirds of women had experienced feeling like a fraud in the previous 12 months and only half of men.

The extreme discomfort that impostor feelings create is partly triggered by cognitive dissonance – the possession of two contradictory beliefs. The more extreme the cognitive dissonance, the greater the discomfort. Even Sheryl Sandberg admits to feeling that “One day soon, the jig would be up”. She knows she is a high achiever, intellectually and commercially, yet concomitantly believes she hasn’t earned her success and feels it could disappear at any moment.

Ironically, positive traits that can make you successful such as hard work can be hijacked by impostor syndrome creating a workaholic and perfectionist mindset, shying away from asking for help and needing to know everything yet never knowing enough. These behavioural traits insidiously pervade an organisation’s culture.

I have seen how impostor syndrome can paralyse even talented CEOs who end up feeling lonely, unsupported and undeserving of their top leadership role and can suddenly collapse from coping to being ineffective and incompetent. This slashes their personal impact with poor decision making, mood swings, procrastination and a drop in morale, relationships and board confidence.

Critically, this is where impostor syndrome hits the bottom line – profit, revenue per employee and share price. It corrodes agility and responsiveness and dampens innovation through risk aversion and intolerance of mistakes and the blame game. The resulting paralysis of perfectionism and fear of failure constrains the inspirational leadership style needed to drive organisations through tough times.

The destructive cycle of impostor syndrome is illustrated in the diagram. 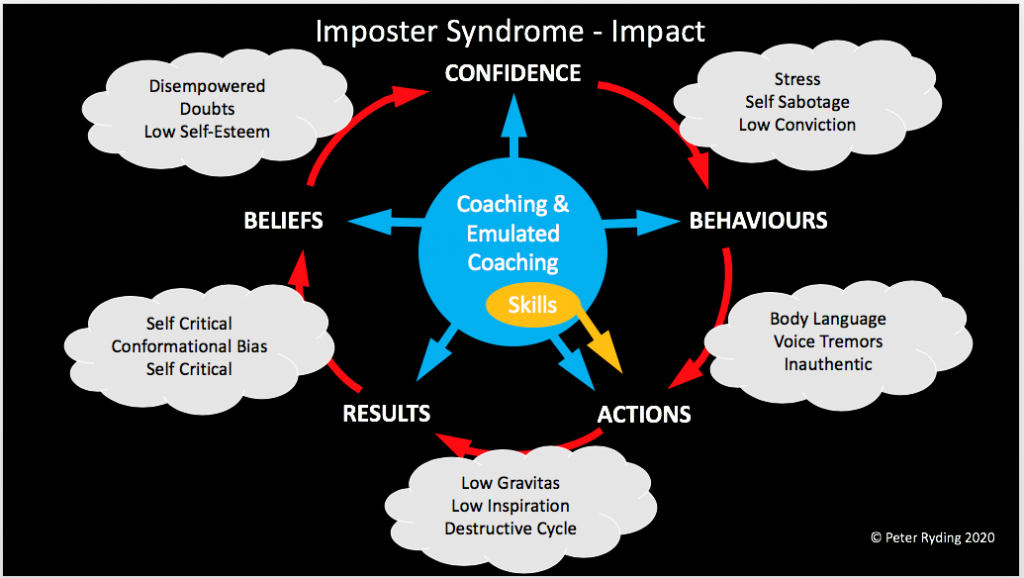 This is bad for anyone, yet as a CEO it is critical because you are a force multiplier. Every time your performance takes a hit it impacts the performance of everyone throughout the business. And that is just your impostor syndrome before factoring in everyone else’s! That is why acknowledging and dealing with impostor syndrome at all levels in your business is vital. So, what must you do to overcome impostor syndrome personally and in others?

In my experience, the 7 key actions are:

1. Accept that impostor syndrome is a thing that has a real impact on people and businesses. It is not psychobabble that you can ignore. Talk about it openly and encourage others to do so. Laugh at it; laughing instantly diminishes its power and reduces it to psychological noise.

2. Permit yourself to not know. A leader’s job isn’t to have all the answers, simply to create the conditions for really talented people to find them and shine. Rely on others, develop trust and value their input. Set yourself the goal of creating teams of experts where your technical expertise is always the lowest in the room.

3. Ask for help and support. Being humble is not the enemy of strong; they can be lived simultaneously. Interestingly, most people love to be asked to help and then feel great that they have. It deepens relationships and builds trust.

4. Treat yourself as you would a best friend, don’t be negative or overly self critical. Accept your mistakes, learn from them and move on and fully acknowledge and celebrate your successes.

5. Deeply understand who you are – your values, fears and dreams and who you must stop being to become the person you want to be. If being a CFO was your route to becoming a CEO, let go of the numbers and become an inspiring leader. After all, what got you here, won’t get you there.

6. Build inner self confidence by having a vision for yourself and your business and share that with passion and energy. Enthusiasm is catching – in yourself and others. If the CEO is not passionate about the future, how can others in the organisation?

7. Create a combined learning and coaching culture where learning is seen as a requirement not a luxury and where coaching is made available to all employees via 1-1 coaches for top executives and emulated coaching for everyone else. This is because research has shown that whilst training new skills can deliver 22% improvement, combining it with coaching impacts every part of the destructive cycle and delivers 88% uplift. It erodes the fear of not knowing, allows for mistakes and failure, facilitates creativity and releases innovation.

And as COVID-19 and other VUCA elements drive more stress and remote working, with associated mental health, loyalty and retention issues, taking action to escape the destructive cycle of impostor syndrome, for yourself and for your people, surely has to be one of the biggest lose-lose or win-win decisions that we all face. Which will it be in your business?