The Return of the Handshake? 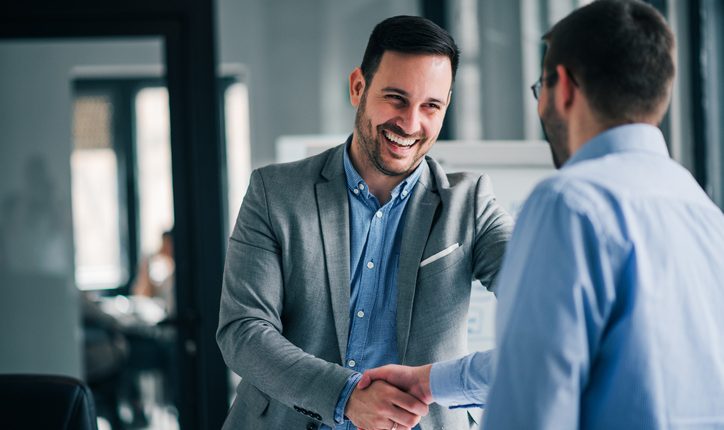 That simple gesture, long seen as a standard of goodwill and psychological safety, is now creating a lot of head-scratching. It’s burned into American work culture, yet many people are uncomfortable literally reaching out in the way they used to. So, what’s office etiquette going to look like once the pandemic clears?

On the one hand (pun intended), some people have acclimated to the lack of handshaking relatively well. To them, ditching the custom isn’t a huge deal at all, since the virus accelerated the move to digital and forced people to get used to interacting in non-physical ways already.

Even some leading health experts, such as Dr Anthony Fauci, are more than happy to see handshakes disappear because he states that physical contact can spread many diseases and illnesses. In a recent survey in the United Kingdom and Germany, 57% of people said they worried about coworkers getting too close and 72% said they didn’t want handshakes anymore.

Then, there is the cultural argument. Even if you take digital transformation out of the picture, handshakes aren’t the norm for businesses around the world. In Japan, for example, the standard is a shallow bow. Around the world, sticking out your tongue, bumping noses, air kisses, and clapping all are used as forms of a greeting. So, if there are other options, why cling to one particular choice so hard?

We’re meant to be social and connect, and assessing compatibility is a natural part of that, even if we might not even be aware it’s happening in the moment.

On the other hand, we are hardwired on a neurological level to use handshakes to measure how compatible we are with somebody else. Moran Cerf, professor of neuroscience and business at Kellogg School of Management, argues that handshakes allow us a chance at “chemosignaling” for the purpose of determining compatibility. If that’s the case, Cerf argues, then the communication that is gained from the gesture might not be something that’s so easy to toss into the trash. Many professionals also point out that phone calls or online meetings just aren’t the same as a handshake when it comes to establishing real rapport.

What you can do (and most likely will see)

Taking the neurological argument into account, it might be very difficult to abandon handshakes completely. We’re meant to be social and connect, and assessing compatibility is a natural part of that, even if we might not even be aware it’s happening in the moment.

But COVID-19 has raised awareness of hygiene practices and the need for physical space in a way modern businesses have never seen before. We’ll likely not lose that awareness any time soon, given that so many of us have suffered very real, heartbreaking losses and difficulties. At the same time, the pandemic came at a time when companies were already trying to find ways to be more diverse and respectful of different practices.

People have used handshakes since ancient times as a signal of camaraderie and respect. The gesture has survived other pandemics the world has gone through, and it will survive COVID-19, too.

So, although you’ll still see handshakes, there likely will be more flexibility about them. People probably will be more understanding if you don’t want to use the gesture and put more focus on cues through the entire experience, such as eye contact and tone of voice. Some industries might be more open to physical greetings, like handshakes, than others.

With things in limbo, etiquette expert Lizzie Post offered some advice on how to approach the handshake in the immediate future. Her suggestion was to “just get comfortable with letting people know where you stand. For example, you could say something like, ‘I’m not comfortable with a handshake, but I’m really excited to meet you/start working together/learn more about…’ That fits right in with today’s values of honesty and transparency.”

Open-mindedness, cue awareness, and self-advocacy are a foundation for the post-COVID future

People have used handshakes since ancient times as a signal of camaraderie and respect. The gesture has survived other pandemics the world has gone through, and it will survive COVID-19, too. But, post-pandemic, you can speak up if you don’t want to use the greeting and common practices likely won’t be the same across the board. So keep an open mind, watch for cues from the other person you’re interacting with, and self-advocate. If you apply that concept not only to handshakes but to other sensitive elements like the realities you and others face at home, you can work in a lot of different settings with real empathy-based success.

Find the Leader You Are