Building Value: The Art of Collecting

Jan David Winitz has spent most of his life thinking about antique Persian rugs. His interest and passion were spurred by a close family member, one of the few women involved in the collecting niche in the mid-20th century. 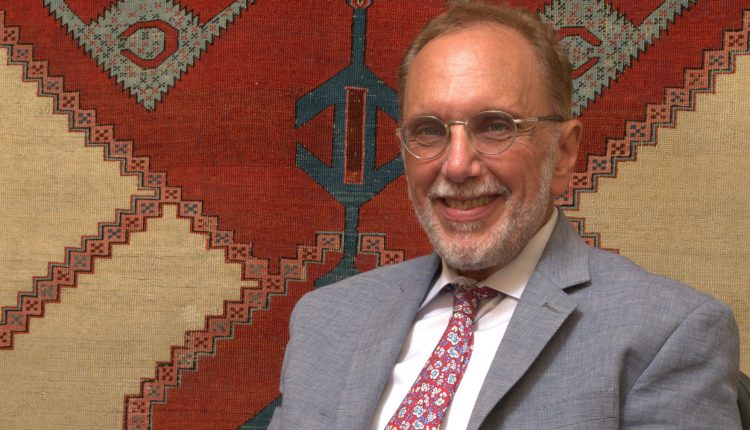 “While collecting baseball cards and playing sports,” he remembers, “I was also looking at rugs with her, asking questions and being drawn in by their majesty and beauty.”

More than 50 years later, he is the world’s foremost dealer in art-level rugs woven during the “Second Golden Age of Persian of Weaving”, ca. 1800 to ca. 1910. But his success is not simply borne of passion. He has built his trove from 40 rugs to more than 2500, building his client base from the San Francisco Bay Area to one encompassing 40 countries on six continents. To accomplish that level of success, he has developed a business model based on education, access, and client service. “And, of course,” he reminds, “we have meticulously built an extensive collection of elite-level antique Persian and tribal rugs that simply are not available anywhere else.”

Although articles that adhere to the “The Secrets of My Success” narrative are never in short supply, Winitz doesn’t believe in secrets or shortcuts. “We have never hidden how we built our global gallery,” he says. “We have always believed in giving our clients the tools they need to become educated buyers and collectors.”

What is he most proud of?

That’s not an easy question for him, but he does find tremendous satisfaction in knowing that more than half of his clients are repeat customers, some of whom have bought repeatedly over more than three decades. He says, “It’s apparent that we are impassioned about the art of antique Persian carpets, and our clients trust that.”

He still works from his office at Claremont, which he founded in 1980. It is in the exact physical location that the Gallery still occupies, albeit now encompassing two buildings and four separate showrooms. Behind his desk, hanging on a wall, is an early 19th-century Bakshaish piece that he acquired when he was in college. It is not for sale, but he says it would attract a price in the seven-figure neighbourhood if it came to market.

“I paid $3500 in 1970.” However, the rug has fond memories for him and has intrinsic value far beyond and different from any monetary evaluation.

“The rug epitomises all of the qualities that can be attributed to the piece of art that it is,” he says. “It represents the culture of the people (primarily women) who wove it and the philosophies of their tribe and their world. Its visual and emotional impact is apparent to all who see it, whether they have a background in antique rugs or not.”

For Winitz, the term “intrinsic value” is a reference that goes beyond financial assets. Because the finest rugs are increasingly acquired for private collections, for the last decade, he has been explaining to clients that he believes they are the last generation to have access to the finest examples of antique Oriental rugs woven during the Second Golden Age. They represent a level of craftsmanship, dye work, and overall artistic merit that cannot be duplicated. For collectors and art aficionados, they are the epitome of rugs produced and still extant.

“We recognised early on that serious art collectors often were unfamiliar with the antique Oriental rug collecting niche. We identified the greatest stumbling block for newcomers was gaining sufficient orientation and exposure to take the first step.”

Winitz, a high school teacher for several years after graduating with an MA in Education from UC Berkeley, understood upon opening his Gallery that in dealing with clients who had the means to obtain whatever they wanted, access to significant pieces of art would be paramount to building relationships.

“Shortly after Claremont opened, I began building an international network of buyer/collectors,” he says, “who were on the lookout for rare, elite-level rugs that we could acquire. That has developed to such a degree that we have access to 19th-century carpets of a calibre, rarity, and awe-inspiring beauty that is inaccessible to others.

“We have been privileged to serve thousands of clients over the past 41 years,” he says. “Over the years, we have acquired many private collections built by generational collectors who want to ensure that their rugs end up with people who will appreciate them as much as they have.”

When he opened Claremont in 1980, the best antique Oriental carpets still represented what the Wall Street Journal later described as a “little-noticed niche.” Over the last 30 years, ultra-high-net-worth families, executives of Forbes 500 companies, and Silicon Valley entrepreneurs have gravitated toward the designs and the balance and harmony they bring to a room and a residence.

More recently, art collectors and connoisseurs recognise that the desire for ownership now often outstrips availability. Winitz warns, “We have entered, I believe, a period in the antique Oriental rug market where “’money can’t buy you everything.’”

For certain weaving groups, such as 19th-century Bakshaish and the best Caucasian, Mohtasham Kashan and Ferahan Sarouk rugs, the competition for acquisition is intense. Other dealers have neither the sources nor resources and many of the rugs are essentially “locked away” in private collections. Claremont’s extensive network provides access to what is effectively inaccessible to others with connections to world-class private collectors.

Winitz, author of “The Guide to Purchasing an Oriental Rug,” is proud of a proprietary educational device that he created: The Claremont Antique Oriental Rug Pyramid ™. It has increasingly become his most valuable feature, designed to help buyers assess the value of a rug based on its artistic merit, collectability, and stature versus other carpets. Rugs are ranked on six levels, with Tier 1 being those that museums and royal families primarily hold through Tier 6 that are manufactured reproductions and only of a decorative nature. Tier 2 (High-Collectible) and Tier 3 (Connoisseur-Caliber) rugs dramatically diminish in availability and increase in value.

By definition, antique Oriental rugs are over 100 years old. They were produced in areas such as Persia, the Caucasus Mountains, Turkey, and Central Asia. When he opened Claremont in 1980, the best antique Oriental carpets still represented what the Wall Street Journal later described as a “little-noticed niche.” Over the last 30 years, ultra-high-net-worth families, executives of Forbes 500 companies, and Silicon Valley entrepreneurs have gravitated toward the designs and the balance and harmony they bring to a room and a residence.

He does not discount the importance of the financial aspects of elite-level rugs. The finest historical pieces attract enormous valuations. In 2009, Sotheby’s sold a Persian Safavid prayer rug from the late 16th century for $4.3 million — “the going rate,” claimed the Wall Street Journal, for a top-end Alexander Calder sculpture. And in 2013, the record price climbed to $33.7 million for 17th century Safavid “vase” rug at a Christie’s Auction in London. As recently as April 2021, at another Christie’s auction, an important 17th century Safavid ‘Polonaise’ carpet (Level 1 piece on Claremont’s Oriental Rug Pyramid (©) sold for $2.85 million (US). In the sale, the majority of rugs, which are in high demand from collectors, were Level 2 (High Collectible) and Level 3 (Connoisseur) on the Pyramid.

“My overall observation is that the market remains robust and that antique Oriental rugs are increasingly a significant segment for art and antique aficionados.”

There is a vital distinction between the tiny percentage of 19th-century rugs from the Second Golden Age that Winitz terms “art-level” and the bulk of pieces from that time and later. Both scholars and knowledgeable collectors understand that art-level pieces combine traits that separate them from the norm. “My clients tell me constantly that they form ‘relationships’ with their rugs that other art forms don’t provide,” he says. “In their homes, they display them draped over furniture, hang them as wall art, or place them on the floor to create spaces within rooms.”

As John Keats wrote in Ode on a Grecian Urn, “Beauty is truth, truth beauty—that is all ye need on earth and all ye need to know.”

For many, art-level antique Oriental rugs produce this intrinsic reward that makes them precious on many levels.