British car maker Aston Martin have showcased the production version of the Valhalla. Complete with a new look and V8 engine. 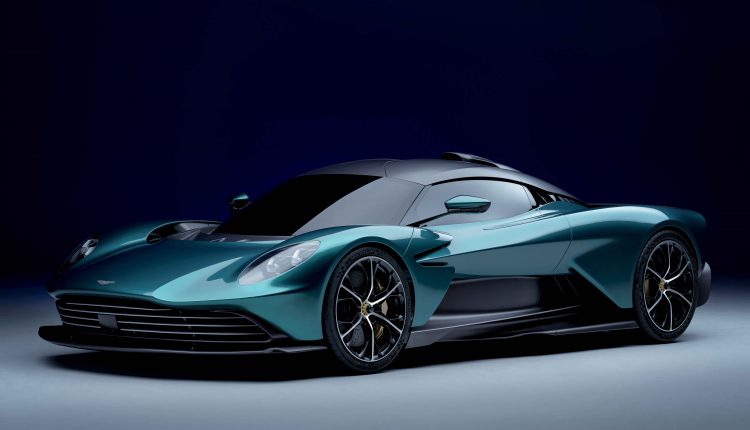 Aston Martin have had a busy few months with the appointment of ex-AMG boss Tobias Moers as CEO, the restructuring of the F1 race team and a series of rumoured cars that may not be going further than the concept stage. However, one car that is heading to production is the all-new Valhalla. The carmaker has just unveiled their production version of the Valhalla supercar and it does not disappoint. With the EV supercar market becoming increasingly competitive it comes as no surprise that one of the world’s most popular supercar brands would release their own model.

The Valhalla surfaced as a concept car in late 2019 with rumours that the plan was to make a plug-in hybrid supercar and it appears that this is exactly what they’ve done. The production version of the Valhalla has disposed of the original V6 to be replaced by a twin-turbo 4.0-litre V8 with a flat-plane crankshaft. It produces 740 horsepower and throws out 7200rpm. The carmaker has pronounced the bespoke engine as the “most advanced, most responsive and highest-performing” V8 they have ever used in a production model. True to its concept roots, the Valhalla has a plug-in hybrid system with motors on both the front and rear axle backing up the V8. If reports are to be believed, the Valhalla can reach 80 mph on electricity alone. The drive train also switches between different axles depending on what mode you select. In EV mode power is only sent to the front wheels, but in other drive modes, the electric boost constantly varies between the axles making the Valhalla an all-wheel-drive car with the ability to send 100% of power to the rear. This allows the Valhalla to boast some eye-watering statistics, such as the 937 horsepower and 738 pound-feet of torque. Speed-wise the British carmaker claim the Valhalla can hit 62 mph in 2.5 seconds with a top speed of 217 mph.

Similar to their other high-profile concept, Valkyrie, the Valhalla is built using a new carbon fibre tub to allow maximum stiffness and minimum weight. In addition to stiffer Formula One-style suspension, the Valhalla can be lowered in ‘track mode’ to maximise downforce in homage to its F1 roots.

It’s hard to ignore just how beautiful the Valhalla’s styling is. Following some significant changes from the original concept, the new front end is cleaner, with bigger headlights and a larger grille more in keeping with the Aston Martin style. The windscreen has also had some significant changes leaving a design that flows better along with the redesigned roof scoop. From the side, the visible line that runs from the fender retains the wonderful flow of the car all the way round to the reshaped rear end complete with a lower number plate. Aerodynamics play a key role in the looks of the Valhalla, utilising significant active aerodynamic surfaces most notably on the front surfaces and rear wing. From front to back and even underneath the carbon-fibre body has been aerodynamically enhanced with inspiration trickling down from the company’s F1 pedigree. The only slight downside to the revamped looks of the Valhalla is that the original concept version reportedly plays a significant role in the new James Bond film No Time to Die which has been repeatedly delayed due to the coronavirus pandemic meaning that by the time the movie is released the concept car will be outdated. A minor exasperation considering how good the finished version looks.

While there haven’t been any interior photos to look over yet, new details have emerged and it would appear that the Valhalla will be far more useable as an everyday car than some of the other concepts. Available in both left- and right-hand drive configurations with a larger interior space than the Valkyrie, complete with climate control, a new infotainment system that is configured for both Apple and Android devices, adjustable pedals and a steering column. The production model will also include adaptive cruise control, forward collision detection and blind-spot monitoring. If that’s not enough, access is via stunning forward-hinged butterfly doors that have cut-outs in the roof.

The Valhalla is a testament to Aston Martin’s desire to blend its production models with its F1 team, with key developments being aided by the company’s own F1 drivers Nico Hulkenberg, Lance Stroll and Sebastian Vettel. As yet no price tag has been announced for the Valhalla and there isn’t a set release date, what is clear is that the Valhalla will be a very sought-after car and one that the brand are very excited about.