How to Break Down the Promotion Glass Wall in Business

Crucial to establishing gender equity in an organisation are effective training programmes for women and recognition of the achievements that make them suitable for upper management. 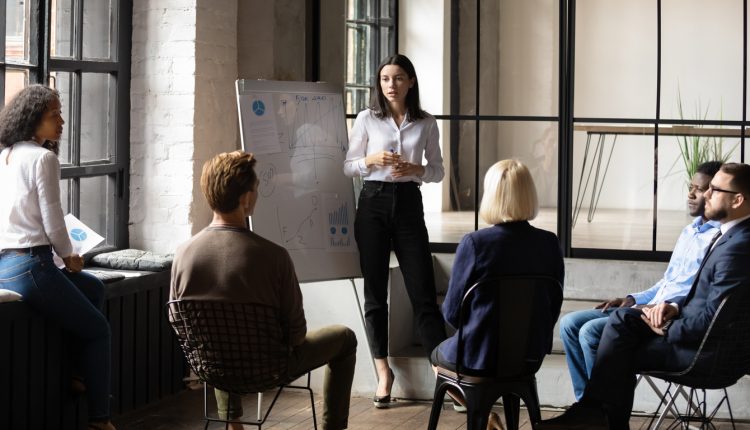 Patricia Seabright, speaking coach and the author of ‘She Said! A guide for millennial women to speaking and being heard’, explores the obstacles faced by female employees aiming for higher positions.

Amazing isn’t it, that we are here in 2021 still needing to talk about equality in the workplace? And yet we do.

The data from the McKinsey Lean In “Women in the Workplace” report shows that at entry level, the work force is balanced 51% men, 49% women. However, that percentage declines at every step of the management ladder until at senior management level only 22% are women.

The fact is it is still a significantly uneven playing field. What are these issues? They are many and various – interruption, ideas appropriation, judgement, criticism, unequal pay, double standards, micro-aggressions, and unconscious bias. Unlike previous decades when the discrimination against women was overt, today the issues are often subtle but insidious. It is therefore easy for women to be unaware of the problems and barriers they face. Women quickly move to blaming themselves and listening to their inner impostor, who tells them they don’t deserve to be there in the first place!

Because of these societal paradigms that effectively press on women and sub consciously encourage them not to speak up, many women feel uncomfortable speaking in public scenarios, e.g. meetings or presentations, and that when they do, they are often find it hard and feel not heard. When women are not heard, that is a major issue for their careers. Being heard in meetings, for example, is important. It is where reputations are built and people start seeing you as a problem solver, an ideas person or as leadership material.

When women are not heard, that is a major issue for their careers.

More than a glass ceiling, it is a glass wall that women frequently walk into – they do not realise what is in front of them until they crash into it! It is hard to deal with what you do not clearly see. Raising awareness and understanding of what is really going on around you is critical to breaking down the glass walls.

What else needs to be done to improve the situation and fix the “broken rung” of the female career ladder from entry level to management?

Many organisations offer management training or leadership development programmes for their aspiring talent. That’s great. However, with our clients we always make the point that there needs to be a part of those programmes – particularly around communication and being heard – that are run specifically for women. We offer programmes that effectively complement existing leadership programmes but address these specific areas.

1. Female specific elements to the programme

Many aspects of leadership programmes – the ability to delegate, to analyse, to set strategy, to motivate – may be common to men and women equally, and hence it is entirely fair that the curriculum should be the same. However, there needs to be a separate part of any leadership programme that recognises that women face specific challenges and educates them to deal with it.

For example, the likeability bias. Leadership development programmes will encourage people to develop their leadership traits. You have to be visible, to be determined and demonstrably confident. But when women behave like this, they are often judged negatively for it. When they speak up powerfully, when they articulate views and ideas that are strong and assertive, when they talk confidently about their achievements, they risk actually being perceived as less “likeable.”

Raising awareness and understanding of what is really going on around you is critical to breaking down the glass walls.

This is caused by prescriptive bias. It is how we expect people behave, Societal and cultural expectations of men and women are very different, and traits typically associated with a “good” woman do not correlate closely with those of leadership.  It is a form of unconscious bias.

Sheryl Sandberg in her book “Lean In” cites an experiment conducted at Columbia Business School. They selected the CV of a real-life female entrepreneur. The woman’s real name was Heidi Rosen, so Heidi was placed on one set of identical CVs, and a man’s name, Howard, on another. Half of a group of business school students read one CV, and the other half the other. The result was remarkable. The students rated Heidi and Howard as equally competent. However, Howard was judged to be likable and a good colleague. Heidi, however, was seen as aggressive, selfish and not someone who would be a team player, or someone who they’d like to work with!

Developing a conscious awareness of this and developing proactive skills and strategies to deal with it should be a part of leadership development for women.

2. Female coaches and mentors are needed

A woman who was CEO of a division of a multinational business told me of a time when she was up for an award and, to compete, she had to present her achievements to the global CEO. She was advised that she needed to position the presentation to talk about her and her achievements, whereas she was inclined to talk about the team effort. She followed the (male) coach’s advice and was subsequently criticised for lack of acknowledgement of her team and did not win the award! I have been told similar stories many times since. Women are judged by different standards and different criteria and you need to be aware of that. Male coaches and mentors often are not, and in fact can give advice that is perfect for men but highly counterproductive for women.

3. Ensure a range of leadership paradigms are covered

Professor Tomas Chamorrow-Premuzic talks about how traditionally society has conflated competence with confidence. Gregarious, bullishly confident, even strident men are often seen as good leaders, regardless of their actual ability. Women displaying strong confidence however are penalised for it, he said: “we are, it seems, less likely to tolerate high confidence in women.”

New Zealand’s female Prime Minister, Jacinda Arderns, summarised this well when she said: “One of the criticisms I’ve faced over the years is that I’m not aggressive enough or assertive enough, or maybe somehow, because I’m empathetic, I’m weak.” She however has managed to create a style of leadership that encompasses both. Owners of Leadership programmes need to ensure that the presuppositions inherent in their programmes are not around traditional, male -centric paradigms of leadership.

Organisations that are serious about achieving gender balance and all its attendant benefits would do well to ensure that they are providing the right development and support for women to equalise the playing field and help fix the broken rung.