US vs. China: A Technology Cold War 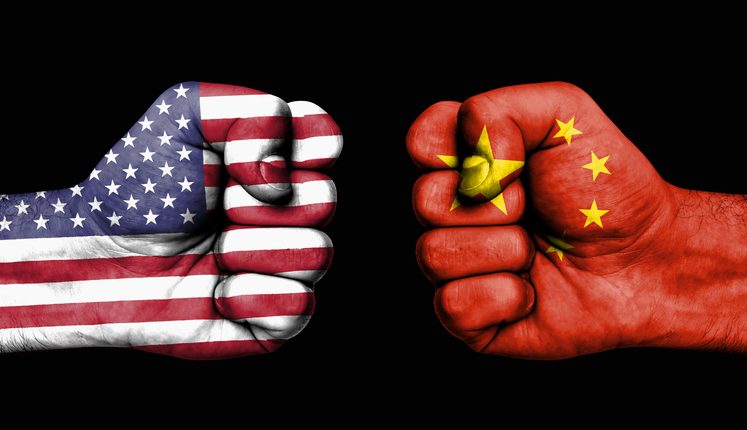 Pro-democracy protests and a national security law have brought attention and uncertainty to Hong Kong while at the same time the US is banning or seeking the forced sale of Chinese companies operating in the US, like Huawei and now TikTok (a video sharing app owned by China’s ByteDance). Even more recently, some imports from China’s Xinjiang region are being targeted over possible human rights abuses.

Market consensus is that Sino-US tensions will be a long-term headwind for all. A recent survey suggested two-thirds of Americans disapprove of China, making China an ideal target for both the Trump and Biden election playbooks. The rhetoric will likely intensify as the November election date nears.

Trade is a different matter altogether. Both China and the US were hit hard by the coronavirus. However, China dealt with it more effectively not least due to a more established ‘social surveillance’ system which permits much greater tracking, tracing and specific isolation. Nevertheless, a temporary truce in trade is essential for the recovery of both economies. Top officials from both sides reaffirmed the Phase One trade deal at a closed-door meeting in Hawaii. And China is buying more American farming goods.

Among the tensions, we see a “technology cold war” as a major future risk for global investors. It might have far-reaching implications for industrial supply chains, technology companies and consumers everywhere.

Global supply chains have never been more integrated. For example, Tesla buys EV batteries from Korean and Japanese suppliers who import cobalt and graphite from China. Tesla then assembles and sells its final products globally, including back to China. Given concerns over national security and now supply chain reliability post-COVID-19, some adjustments have already taken place to the supply chains. A more isolationist outcome is likely, but we do not expect China to be a material loser in the process, as long as it continues to embrace innovation and – importantly – continues to reform and encourage domestic consumption.

The evolution of a supply chain is natural driven by factors like cost efficiency, labour supply, raw materials, supporting facilities or logistics to end-markets. Technological breakthroughs often require cooperation from everyone in a product ecosystem. For example, ASML, a Dutch semiconductor supplier, needed the support of TSMC, a Taiwanese supplier company, in advancing the manufacture of smaller components for smart devices. Both companies needed each other’s know-how and R&D skills to deliver a better ultimate product. It can be difficult to quickly replace part of a supply chain without severe disruptions to all.

Earlier this year, the US Government further restricted the supply of chips to Huawei, China’s leading telecoms equipment producer. No doubt this pressured the company and its supply chain, but not to a full stop. Huawei has been adapting since tensions started two years ago. In addition to billions of dollars of annual R&D spend, it is working with domestic suppliers to fast-track substitute technology and products.

Take 5G. China is currently a world leader in 5G rollout and supplying the systems that run the networks. Currently, 85% of the components in a 5G base station are procured from or can be replaced by non-US (mostly Chinese domestic) suppliers. For the remaining 15%, like the principal controllers and the analogue-to-digital converters, they will be replaced by a new generation of Huawei’s products. Some of these alternatives might not perform as well as the US comparables, but they do the job. The chart below shows how the supply chain for a 5G station can change. 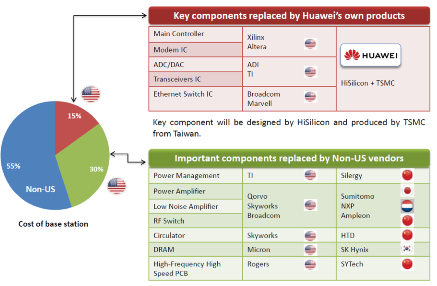 By the end of 2020, China’s 5G base stations will account for over 70% of the worldwide total. It will become the second country after South Korea to cover all major cities with 5G networks.

US sanctions may extend to other Chinese tech companies. Internet giants like Alibaba and Baidu buy graphic processing units from Nvidia to use in cloud computing and artificial intelligence technology. These chips have allowed Alibaba to improve their customer service AI-powered chatbot to understand more than 90% of over 3.5 million daily customer queries, even detecting a customer’s emotion and alerting human employees to intervene. This progress will be impacted if companies cannot source the most advanced chips.

US tech companies are no less impacted by losing large Chinese customers. Over 25% of Nvidia’s revenue[1] comes from China. Without this, US companies may have to cut back R&D spending, which is critical to maintaining their global leadership.

The outcome of a technology cold war is negative for Chinese companies who depend on foreign technologies, as well as their suppliers globally. It is also bad news for consumers everywhere. Duplicate research usually means higher prices. But there are winners. Local consumer brands gain from rising nationalism and domestic product substitution. Higher sales allow them to invest in R&D and catch up to foreign brands.

Consumption upgrades, urbanisation, digitalisation, and financial reforms will continue to be the major growth drivers for the Chinese economy. None of these has changed; if anything, the Sino-US decoupling has accelerated reforms and technological independence in China.

In conclusion, rising tensions between China and the US are real and cannot be ignored. Whilst it is important to avoid companies that will lose, there are also many investment opportunities that gain from this.

IWD: Why ‘Choose to Challenge’ Should Resonate with Tech Executives