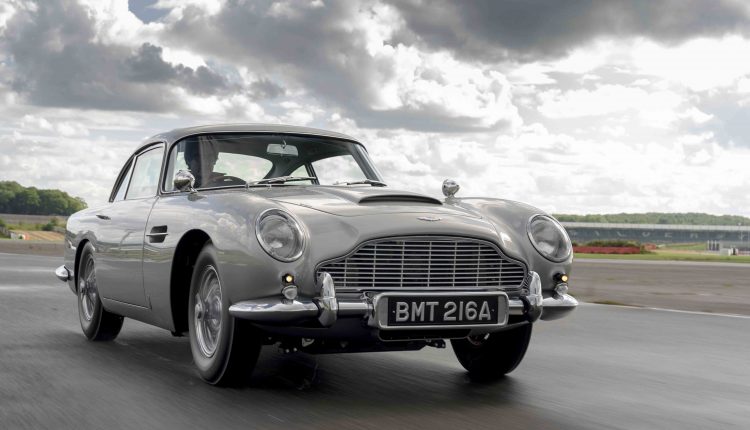 This week the engineers and craftsmen at Aston Martin put the finishing touches to the highly anticipated and very first DB5 Goldfinger Continuation car which rolled off the production line at the luxury UK car makers plant in Newport Pagnell, Buckinghamshire – making it the first DB5 produced in more than half a century.

The DB5, featured in the much-loved Bond films, is undoubtedly one of the most recognisable cars in the world and is unquestionably one of the world’s most desirable and sought-after classic Aston Martin models.

Less than 900 models were built of the original cars between 1963 and 1965, including, of course, the world’s most famous secret agent James Bond, who’s lifelong affiliation with Aston Martin and the DB5 began in the 1964 film, Goldfinger.

55 years after the last new DB5 rolled off the production line at Aston Martin, a new limited edition run of the DB5 is now underway, marking Aston Martin’s investment into the ‘continuation models’ which have gained popularity among other automotive companies including Bentley and Jaguar.

The all-new DB5 Goldfinger has been created in association with Bond filmmaker EON Productions, and not only looks identical to the original cars, but it also features a desirable addition of several working gadgets first seen in Goldfinger. Enlisting the renowned special effects supervisor Chris Corbould OBE to assist in creating a true replica, the new cars include a slew of gadgets that Q would have been proud of, and indeed, may have been the original creator of.

Only 25 of the new models will be made, with each one meticulously designed to be an authentic reproduction of the beloved screen version of the DB5 right down to the classic special effects supervisor Chris Corbould OBE Silver Birch paint seen way back in Goldfinger.

Car fanatics and film lovers will delight at the original aluminium body panels and the identical chassis structure taken from the 1963 models. Under the hood, the DB5 continuation model is powered by the same 4.0-litre inline six-cylinder engine with triple carburettors delivering 290 horsepower through a 5-speed manual gearbox. The only downside to the detail of the replica produced by the UK carmaker is that the emissions, unfortunately, render the car illegal for the road.  So, whilst you can drive it in a private setting, this isn’t a car for your family Sunday drive.

The project has been years in the making and has taken hundreds of hours work from a number of engineers, craftsmen and women and designers to bring it to fruition. According to Aston Martin, each DB5 takes approximately 4,500 hours to complete. And it appears that the time spent on the project has been extremely worthwhile, given that all 25 have already been sold.

Marek Reichman, Chief Creative Officer of Aston Martin Lagonda, said: “The DB5 is, without question, the most famous car in the world by virtue of its 50-plus year association with James Bond. To see, the first customer car finished, and realise that this is the first new DB5 we have built in more than half a century, really is quite a moment.

“It is a genuine privilege, and significant responsibility, to have been involved in the shaping of this new DB5 and to be helping to lead the creation of new versions of this automotive icon. I’m absolutely certain that the 25 lucky owners who are beginning to take delivery of these cars will be thrilled with them.”

With each model sporting a price tag of a reported £3million plus, the first deliveries of the DB5 Goldfinger Continuation to customers have commenced and will continue through the second half of 2020.

The Rise of Cyber Monday and the Death of Retail

China Imposes Up to 212% Tariffs on Australian Wine