When Will Brands & Billionaires Join the Trillion Dollar Club

In late April of this year, Microsoft became the latest company to join Wall Street's exclusive ‘Trillion Dollar Club’ after hitting a market capitalization of one trillion dollars and claiming the title of ‘America’s most valuable company’ and can successfully join Apple in this elite club.

For CEO Today’s November edition, the team at Comparisun have analysed past and present valuations of some of the world’s richest companies and individuals in an attempt to predict who will join the Trillion Dollar Club and when they will get there.

Which companies will be the first to join the Trillion Dollar Club?

Microsoft and Apple are two of the most well-known and well-loved brands in the world, and as of the beginning of 2019, estimates suggest that 45% of all smartphone users in the US own an Apple iPhone. At the beginning of the year, Apple also had around 1.4 billion active devices worldwide, which has most-likely increased since then.

And according to most recent figures, there are more than 1.2 billion Microsoft users and over 155 million monthly active business users of Office 365.

Microsoft passed the $1 trillion milestone after its huge jump in stock price, following strong fiscal Q3 earnings. This was a triumph ahead of their biggest rival – Google. This also meant that they overtook Apple as the world’s most valuable company.

While the $1 trillion valuation is something that investors usually keep an eye on, Microsoft have never been focused on it. Microsoft’s Chief Marketing Officer Chris Capossela even said: “This is a metric that nobody on the senior leadership team is tracking. Nobody is sitting around high-fiving when the stock hits some new high”.

Apple passed the $1 trillion target in August 2018, becoming the world’s first-ever public company to be worth that much, 42 years after they were founded. At that time, it meant that Apple’s stock market value was more than a third of the size of the UK economy, Turkey and Switzerland. Their astounding performance undoubtedly left rivals trailing in its wake – in fact, the day that Apple celebrated their triumph, Facebook suffered their worst day in US stock market history, losing more than $120bn. 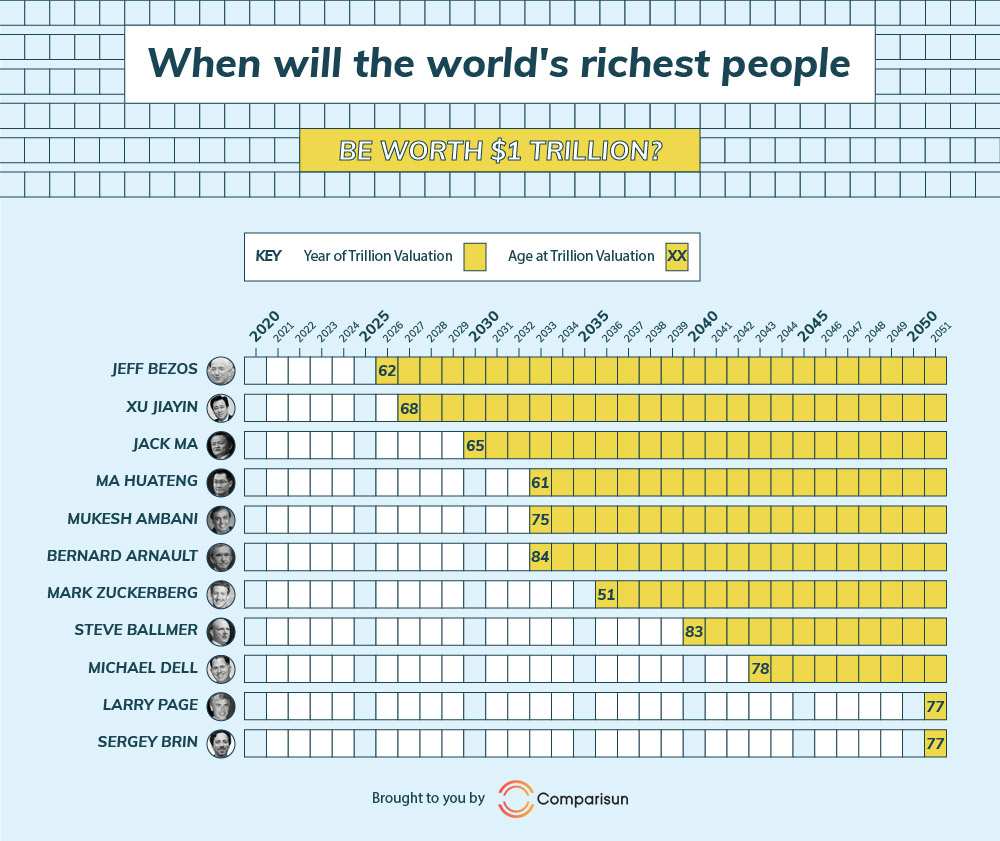 So, with Apple and Microsoft sitting comfortably as the richest companies, what happened to Amazon? Surely the success of Bezos and his company means they would be the first to reach the target? In fact, as of 1 October 2019, their market cap sits at just $858.55B, which is undoubtedly much less than where they need to be if they want to claim their throne and join two of the biggest tech names in the world.

Amazon did hit the threshold in the past but have since dropped out again. Within the last 18 months, the company has experienced volatility driven by ongoing trade wars, big tech privacy concerns and a weak macro economy, however, its stock has gained 52.7% since the start of the year and is up by a whopping 452% in the last five years. According to Comparisun, Amazon will only have to wait another year or so to rejoin the elite ‘Trillion Dollar Club’.

Google is set to join their fellow tech giants Apple and Microsoft in hitting the $1 trillion mark within the next year also. They are closely followed by the last of the Big Four tech companies, Facebook. The social media kings’ market cap currently sits around $665bn but has seen an average growth of 24% over the last five years. If this continues, they could see themselves at the $1 trillion mark in just a little over 2 years.

Next in line would be Warren Buffet’s Berkshire Hathaway conglomerate and financial services provider, Visa, who could both hit $1 trillion valuations as soon as 2023.

No-one could avoid Jeff Bezos’ recent divorce drama, with his estimated $38 billion loss to ex-wife. However, despite this, he is still by far the richest person in the world. His net worth has grown by 34% on average over the last five years, which could see him stepping over the $1 trillion mark as early as 2026 at the age of 62.

Jeff Bezos officially sits at the No.1 spot on the Forbes 400 list of richest Americans and has shattered records in his wake. According to Bloomberg, the Founder and CEO of Amazon has $166 billion to his name.

Bezos had an early passion for tech and went on to study computer science and electrical engineering at Princeton. When he graduated, he worked his way up on Wall Street and soon became the youngest Senior Vice President at his firm. Just four years later, in 1994, he opened Amazon.com – then just an online bookstore. In less than 30 years, the company has created a net income of $10.07 billion and current revenue of $232.89 billion.

Just behind Bezos is the well-known Mark Zuckerberg, who could gain trillionaire status at a much younger age than Bezos. If Zuckerberg stays at his current rate growth, he could see himself being worth $1 trillion at just aged 51. He launched Facebook in 2004 whilst at university as just a ‘Harvard Thing’, until he decided to spread it to other schools. According to numerous sources, Zuckerberg only receives a one-dollar salary as the CEO. He has also pledged to give away 99% of his and his wife’s wealth, which is estimated at around $55 billion. 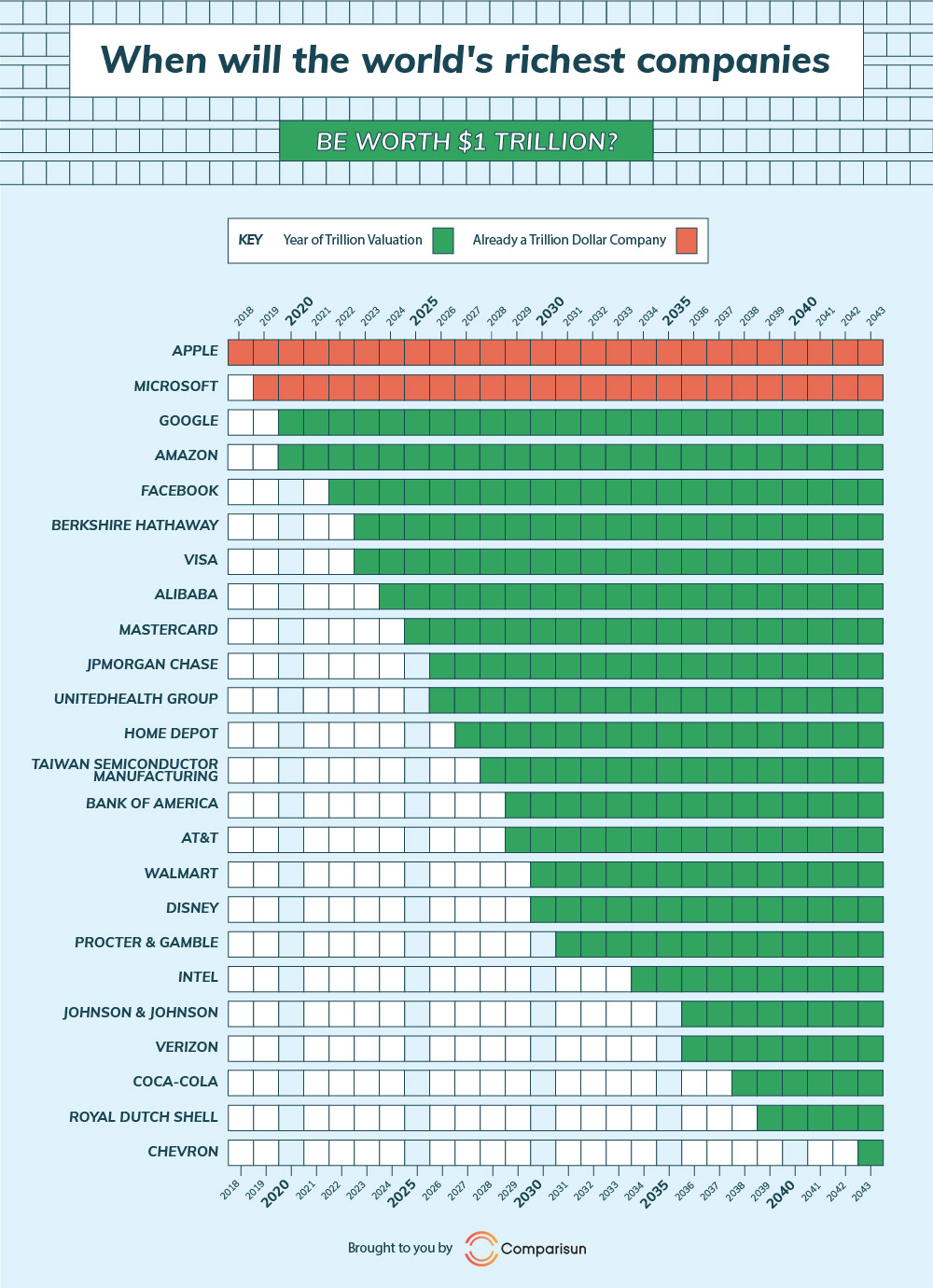 Time Magazine has named him among the 100 wealthiest and most influential people in the world as a part of its Person of the Year award. He was also ranked 10th on the Forbes list of The World’s Most Powerful People in 2016.

Other names on the list include Xu Jiayan who could be set to hit the $1 trillion mark at the age of 68, in 2027. He is the Founder and Chairman of Evergrande Real Estate Group, the world’s most valuable real estate company.

Just behind Jiayan is Jack Ma, Co-founder of Alibaba Group, who would hit the $1 trillion mark at the slightly younger age of 65, in 2030.

Co-Founders of Google, Larry Page and Sergey Brin, also make the list, estimated to both make a trillion aged 77.

Of the 25 individuals we analysed, only eleven realistically have a chance of becoming a trillionaire during their lifetime, based on their recent rate of wealth growth.

You can see the original research from Comparisun here:  https://www.comparisun.com/resources/the-trillion-dollar-club/

How Visual Assets Are A Key Revenue Driver For Online Brands