Luxury car manufacturer Bentley is celebrating its centenary with a collection of limited edition cars, golf clubs, clothing and collectable books, including a trio of Mulliner customised Bentleys and the spectacular ‘100 Carat’ edition tome, decorated with diamonds and costing over $250,000.

It’s been 100 years since W.O. Bentley realised his ambition “to build a fast car, a good car, the best in its class” in 1919. And now to honour the continuing success of the brand that W.O. Bentley started in the early 19th century Bentley have created a series of breathtaking centenary models in utilising their own esteemed customisation wing Mulliner paying homage to historic designs, including the Mulsanne, Continental GT Number 9 and Continental GT Convertible Number 1. 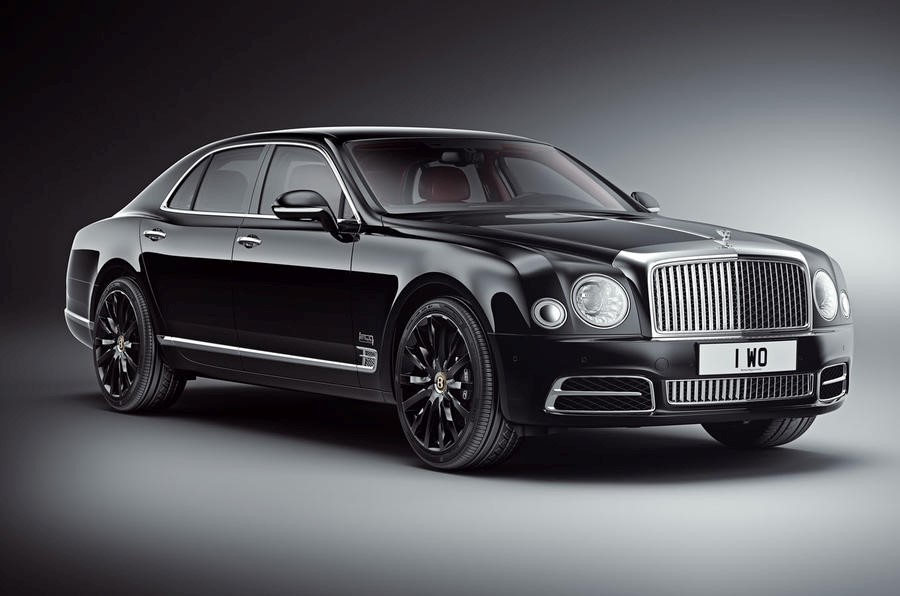 Bentley Mulsanne W.O. Edition. Past and Present perfectly blended together.

The Mulsanne W.O. Edition by Mulliner is the flagship car of Bentley’s centenary celebrations, paying tribute to the founder of the company through the creation of a stunning version of the popular Mulsanne that takes its influence from the final car designed by Bentley himself in 1929, the Bentley 8. The limited-edition Mulsanne is more than just a car, it’s a piece of Bentley and design history and even contains part of W.O.Bentley’s very own car.

In 2006 Bentley purchased the car once owned by its founder and stored some of the parts. With the centenary approaching the engineers and design team decided to slice the crankshaft from the car into 100 separate sections and place it on display in each of the Mulsanne limited editions. Owners are able to open the rear door of the 2019 Bentley Mulsanne W.O. Edition by Mulliner, and there, exquisitely displayed beneath a piece of glass in the hand-crafted rear armrest, is a sliver of the original crankshaft.

The Mulliner Mulsanne features a twin-turbocharged, 6.75 litre, 8-cylinder giving off 505 horsepower and 752 pound-feet of torque. The top speed of this edition is 184 mph, however, it can reportedly be tweaked to go faster.

With a production run limited to just 100 cars, it provides an opportunity to own a priceless piece of Bentley’s story. Prices have been slated to start from $400,000.

Alongside the Mulsanne sits the Bentley Continental GT Number 9 Edition, a tribute to the famous Bentley No.9 Blower, one of the most-loved and lauded cars ever produced by the manufacturer and one that blazed a trail through the racing circuits of the 30s setting numerous records and catching the eye of the rich and famous including James Bond Author Ian Fleming.

The Continental GT Number 9 Edition seeks to evoke the same sensation and racing-pedigree as its famous predecessor complete with limited edition paint colours, painted 22” wheels and as with the Mulsanne, it features a piece of Bentley history. A fragment of the seat used in the famous supercharged Bentley Blower Sir Henry Ralph Stanley “Tim” Birkin drove at the 1930 Le Mans 24 Hours has been preserved and encased in the dashboard of the limited edition Continental allowing all owners to truly become part of the Bentley legend.

The Bentley Continental GT Number 9 Edition is powered by a 6.0-litre W-12 engine that produces 626 horsepower and is capable of 0-60 mph in just 3.6 seconds, 0.5 seconds quicker than its predecessor. Top speed is stated to be 207 mph, making the GT Number 9 one of the fastest models in its class.

The GT Number 9 is also limited to 100 worldwide and although no official price has been announced, it’s expected to be in excess of $300,000

The third and final Limited Edition in Bentley’s Centenary series is the Bentley Continental GT Convertible Number 1. Inspired by the famous No. 1 Bentley Blower and the woman who helped create its legend, Hon. Dorothy Paget who was instrumental in the original Blower’s rise to fame, whose love for speed led her to provide the financial backing for the first-ever supercharged Bentley – the No. 1 Bentley Blower in 1929. Thanks to her pioneering spirit the Blower is regarded as one of Bentley’s greatest ever successes culminating in it achieving the Brooklands Outer Circuit lap speed record in 1932.

The new Continental GT Number 1 seeks to conjure the same feeling in a modern open-air grand tourer, featuring the highly touted 6.0-liter twin-turbocharged W-12 engine that produces 626 horsepower and 664 pound-feet of torque. This gives the car a 0 to 60 mph in just 3.7 seconds and reaches a top speed of 207 mph.

The styling is as impressive as the performance, with this edition available in 2 exclusive paint colours: Dragon Red II, a nod to the No. 1 Blower’s distinguished red colour, or the Beluga black. The roof is also available in either claret or black and the 22” Mulliner wheels can be finished in gloss Black or Cricket Ball red.

An eye-catching Number 1 has been painted on the front grille and the car is finished with an 18-carat gold plated fender badge, as well as jewelled filler and oil caps to complete the lavish styling.

In line with the rest of the centenary trilogy, this Mulliner edition features a piece of Bentley history in the form of a piston taken from the No. 1 Blower during its restoration. This has been lovingly recast in the shape of a Bentley wheel spinner, similar to those on the original No. 1 Blower. These recast pistons are now displayed within the stunning Bentley Rotating Display on the Number 1 Edition’s dashboard.

Like its counterparts, the GT Number 1 is limited to 100 models and its price has not yet been revealed. 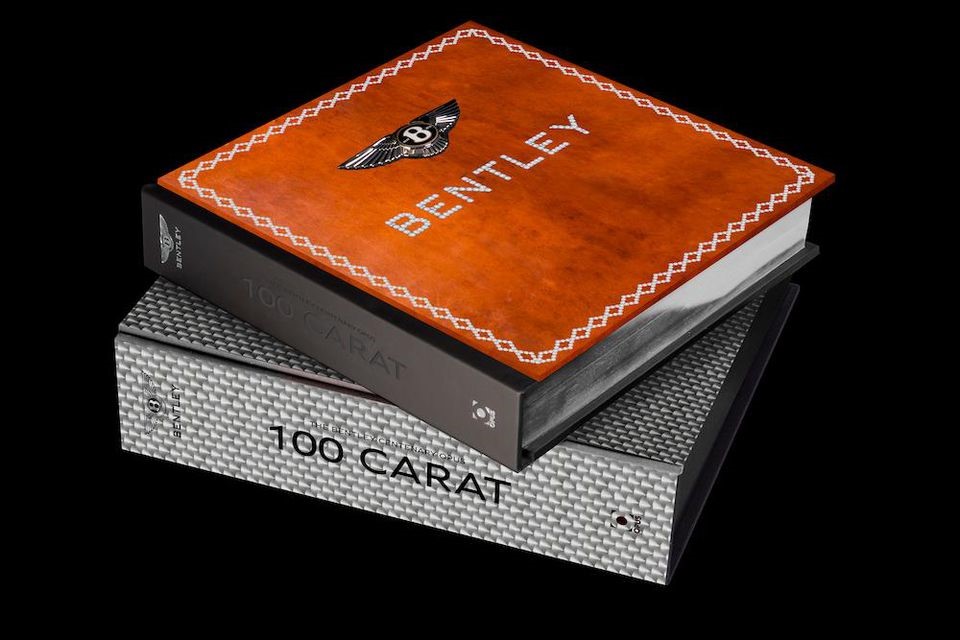 In addition to the raft of stunning limited edition cars, the British company is also releasing a trio of books celebrating their centenary.

In conjunction with publisher Opus, Bentley have produced “The Bentley Centenary Opus” book which chronicles the history of the luxury carmaker. The tome comes in at 800 pages and includes images and tales of the company’s historic Le Mans victories, classic Bentleys and the new generation of Bentley cars that have proved so popular with drivers in recent times. The book aims to tell the stories of the people behind Bentley, from the designers, engineers and drivers who have helped to solidify the carmaker as one of the pre-eminent producers of luxury vehicles in the last 100 years.

In keeping with the brand, the book is as eye-catching as the cars. Coming in at almost a meter wide, the books include imagery, rare historical content and photography that has never been seen before, with a few of the most striking images appearing across special gatefold pages measuring nearly two meters across.

The books are available in three formats, all limited edition in their run. They comprise of:

If that doesn’t sound prestigious enough, the editions are bound in the same leather used in Bentley cars and the Bentley Wings badge is a hand-crafted piece of motoring history in itself, being the same crest that will adorn the Bentley Centenary cars. The Mulliner and Carat books also feature a special rubber section crafted from the winning tyres used on the Bentley Speed 8 in the Le Mans 24 hour race in 2003. The Carat edition goes further down the road of opulence, being coated in 100 carats worth of diamonds perfectly positioned around the limited-edition Bentley Wings badge.

The highlight for Bentley owners is that if you own a Bentley yourself, you can choose to have your own car photographed by the publishers and included in your edition. 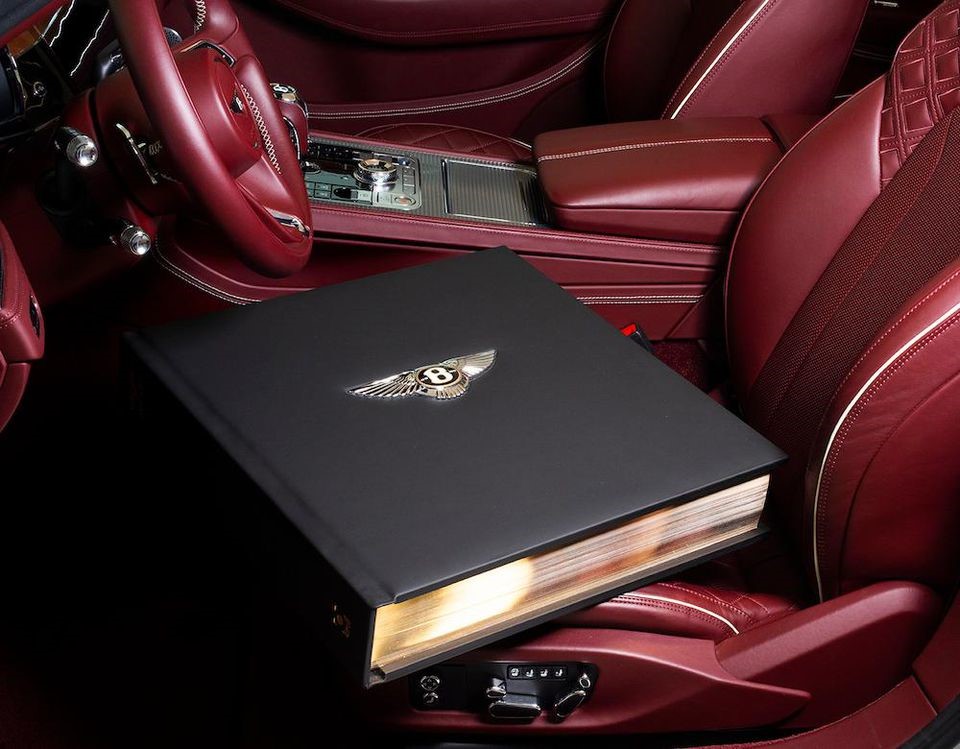 Customers can personalise their books to include their own cars. Photo: Bentley

In addition to the Mulliner cars and the trio of centenary books the British carmaker, who had been struggling in the mid-late part of the last century until the release of it’s now iconic Continental, has released the Centenary Collection, a range of exclusive products including homeware, clothing and even golf clubs that have been produced with the same exquisite detail and style as the rest of its centenary products.

The entire range is available now and is crafted around the lifestyle that has long been associated with Bentley and its cars, and features inspiration from unique Bentley design accents.

The Bentley Centenary Collection is available now and prices range from £85 for a polo shirt, to £12,000 for the specially commissioned set of Bentley Golf clubs. 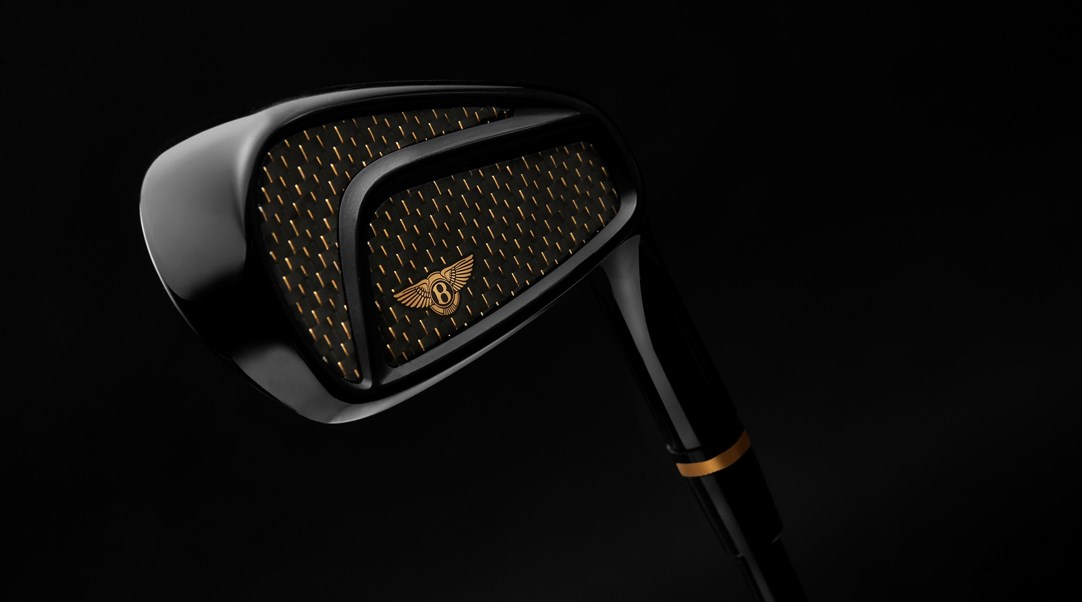 Bentley’s CEO Adrian Hallmark said of the Centenary collection: “Part of what defines luxury is responding to people’s needs for achievement, self-expression and reward, in whatever field they operate, Bentley’s customers of the future will value elements such as tradition, heritage and craftsmanship and innovation. But above all, I believe they will continue to enjoy the thrill of driving.”

Each of the Bentley centenary editions are sure to become among the most collectable items amongst car enthusiasts and the elite worldwide and look certain to enhance the prowess of the British luxury car maker.