The Top 10 Storage Devices for Every CEO

Whether you’re an active on-the-go CEO, or you’re burdened with tons of local data to store, CEO Today has set out to try a few devices, all from top brands in the data storage sector, that will help you not only make the most of your data, but keep, write it and read it in the most efficient way. 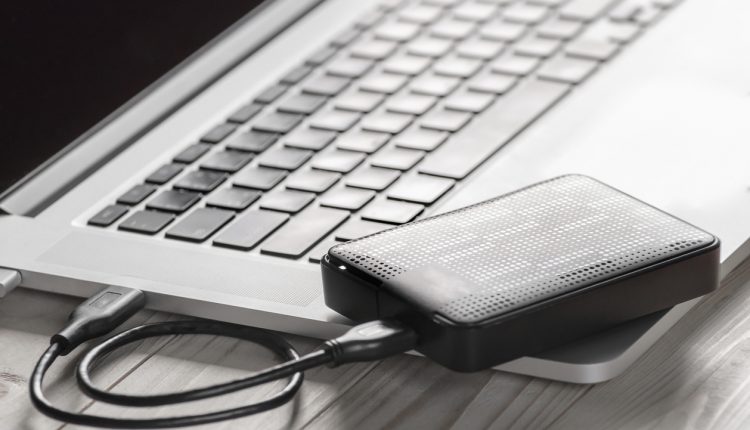 Every CEO role, whether in the finance sector, a creative agency or a big data company, has a need for storing data. Data can be simple text files, passwords, photos, images, videos, excel documents, word documents, presentations, project files and so on; the list is endless. Almost in parallel, each CEO’s storage requirements are different and devices that store, write or read data, come in various sizes, speeds and functions.

Starting off with the plain and simple, but most commonly used type of storage device, the Western Digital ‘My Passport’ is a portable hard drive like any other, but with the addition of being able to purchase cloud storage back up as a corollary. 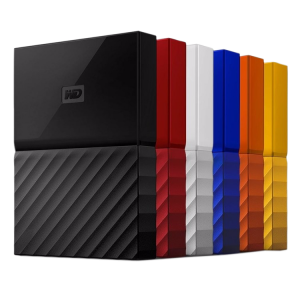 The WD My Passport is one of the most sold portable hard drives of 2018, it comes in several block colours, features a durable external case, password protection, and an auto-backup function every time it’s used, allowing you to backup other data you might need to keep super safe and definitely cannot lose.

Until recently I used one of these as my own personal hard drive for family photos and videos, and it never failed me.

Today we took a look at the Seagate Ironwolf Pro HDD, a large storage hard drive with massive potential, a professional corporate look, and enough storage power to keep you going a whole decade or more. This is for any CEO that handles large files, big data transfers or videos and photos in large quantities.

In addition to being a standalone drive, the Ironwolf is also available as a NAS drive. For those who run a large company that utilises stored data daily, or shares critical data between devices, in large quantities, a NAS system is ideal. It allows you, your clients, colleagues or employees, to all access data from a centralised system, with back up functions included.

NAS systems are like a private cloud right in the office, they’re scalable, fast and less expensive in the long run. 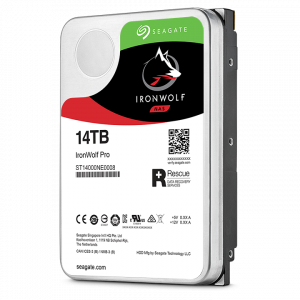 We don’t have a NAS system to test out, but can assure the Ironwolf, which also comes in the Pro range, is a workhorse mass storage device, whether in the network function or as a standalone drive. It’s huge, it’s faster than most standard HDDs, and includes data recovery systems, which I’m sure, when it comes to avoiding data loss, is absolutely key for any CEO.

When it comes to SSDs, data can be stored for performance purposes. This means faster access, with higher read and write speeds. This of course will depends on your internal SSDs ability to process data too, but most CEOs have top of the line laptops or desktop computers these days, all of which have pretty fast internal drives.

When you mix mass storage with high speed performance SSDs you get the Seagate LaCie d2 SSD, designed to perfectly complement SSD-based laptops and all-in-one computers, the d2 massively expands your capacity for professional bandwidth-intensive creative applications. It’s made for CEOs that have a creative flair, and work with large photo and video files, in large quantities. 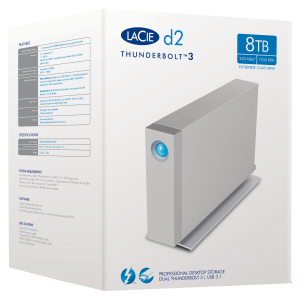 We reviewed the d2 personally, and find that the speed to storage ratio is more than satisfactory. Though the device isn’t portable, and you won’t find a portable device with such capabilities currently on the market, it looks great on my desktop and integrates seamlessly with my workstation. It’s more than fast enough for the work I need to do day to day and has more than enough space for all my files and its backup function.

If on the other hand you’re after something portable, but still as fast as the above SSD, the SanDisk Extreme Pro SSD could do you just right. It’s specifically designed to suit creatives on the go, but actually favours portable storage at high speed for anyone, especially a CEO that needs to get his or her work done fast. No more waiting for files to download … within just a few minutes its done.

Reaching speeds of up to 550 MB/s this is no toy, and although capacity only extends to 2Tb, it is pocket size, durable and even has a space to link it to your backpack. 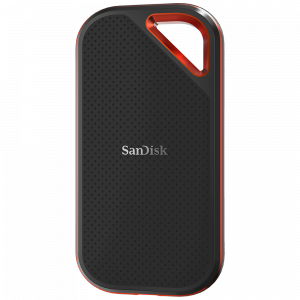 Sandisk also has the portable Sandisk Extreme 900 SSD, which though being a little larger reaches speeds of up to 850 MB/s if that’s what you’re after. We didn’t get to try either of these so I can’t vouch for the quality, but from the specs, this should allow you to transfer a 4k movie or company promo within seconds.

This was likely the portable SSD bought and used by most people in 2018. It’s one of Samsung’s top of the range portable storage gizmos, the Samsung T5 SSD.

It’s actually tiny and will fit in the palm of your hand, it’s super-fast and well, it looks so sleek. This is the kind of drive you should carry with you at all times, for fast access to presentations and excel sheets, photos, video or music. No buffering times, just pure storage enjoyment and easy data usage. If you’re unsure about any of these storage devices, this is the one to go with. IT’s mid-range in the market, but has great speeds, storage capacity and did I mention it’s tiny, weighing just 51g.

I personally tried the T5 and I’m glad to say it loves up to its reputation. I got it in a smooth deep black colour because I’m all about the sophistication, but it does come in many colours if you’re into that. 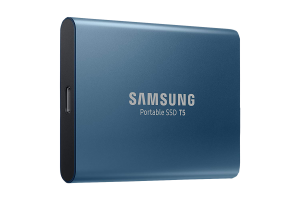 I tested it with some video editing and music transfers and was very happy with the results, no lag or interruptions, with fast reading and writing of all files. It also uses Samsung’s secure password software, though I didn’t stage test any break ins, but I’m sure it will work fine.

Similarly to its little brother, the T5, the Samsung X5 SSD is a perfect mix of capacity and speed, in a small elegant package.

Though only slightly larger than the T5, the X5 boasts an incredible potential for up to 2,800/2,300 MB/s. This is of course only be possible with super-fast internal SSDs in your boot device. Apparently, the X5 lets you transfer a 20GB 4K UHD video from your PC to the X5 in just 12 seconds, providing you have top performance internal hardware. 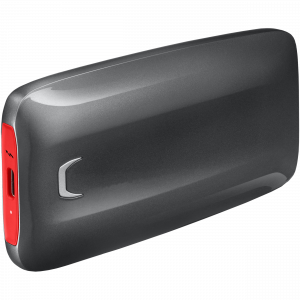 I tested the X5 with some more video editing straight from the X5 drive, using 4K 8bit video without proxy files and the editing was seamless; no loading time, no reading files again and again. I mean that was probably happening in the background but I simply couldn’t tell. Truly impressed, and though a little more expensive, this is the one I will personally be purchasing to use moving forward.

In order to run fast portable SSDs like the above, you also need fats internal SSDs, otherwise you’re not really making the most of your portable drive. In order to run smooth file reading and writing on your computer, faster downloading because the files are writing quicker and smoother frame play and integration with your graphics card, I’d recommend our next choice, the internal Crucial P1 SSD.

We specifically tried the Crucial P1 1TB 3D NAND NVMe PCIe M.2 SSD, which runs at up to 2,000 MB/s. It made boot up the quickest it’s ever been, with my desktop being ready to go in under 15 seconds.

This is of course an internal SSD for your laptop or desktop device, to be used as a separate partition drive or as your boot drive. With how powerful it is, the latter is of course the recommended use. If you add a few more gigabyte of RAM to your device, you will likely be taken aback by how fast your workstation is operating.

Moving onto a new generation of hard drives, the iStorage DiskAshur Dt2 HDD has more than enough storage, with the added function of an encrypted security system. 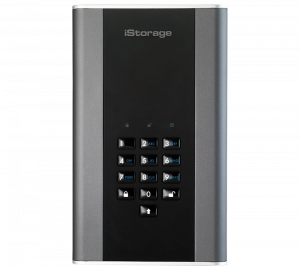 We’ve tried one of these out over the past few weeks, and granted we’ve not had anyone trying to break into it and steal our files, we have picked up on how simple it is to use, considering its specific purpose. It’s super neat, with a sleek professional look. The dials are comfortable, and it takes just seconds to unlock with the passcode. If you need to keep your data, or your client’s data safe, this is your best solution.

We haven’t included any other flash drives in this list because these days flash drives don’t really live up to the cost vs efficiency benchmark of bigger drives, however in this case, an exception must be made.

The SanDisk Connect Wireless Stick has the added function of being able to commute data between your phone, tablet and computer, without and actual cabling or physical connection. With the SanDisk Connect app you can access your files over a wireless connection, via all your devices. The only time you ever have to plug it in is to charge it.

This flash drive is small, super portable and so easy to access in today’s IoTscape. You and your colleagues can all access it at once, stream the same content from it at the same time, and engage in meetings or conferences from the same data. 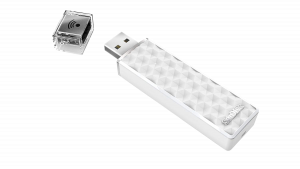 All this without the need for internet. It’s not as fast as the SanDisk Extreme PRO USB SSD, but the connecting function is what I’m sold on for this storage device.

Usually designed for cameras and other gadgets, SD cards are the smallest form of storage device. So, if you’re a secretive CEO and you need to keep your drives covert, this may be your best bet. However, in a more realistic situation, SD cards are tiny, extremely portable, lightweight and fit in you can fit multiple in your pocket without them being any burden whatsoever. 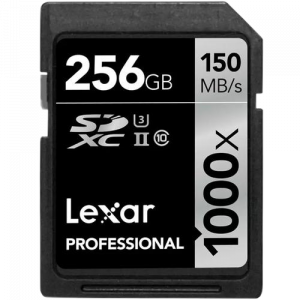 Meeting all those same criteria any other SD card does, the rigorously tested Lexar Professional SDHC/SDXC UHS-II cards offer up to 256Gb at speeds of 150 MB/s. Which makes them some of the best SD cards on the market. If small is your only option on the go, then grab a few of these and they will do the job swiftly and reliably.