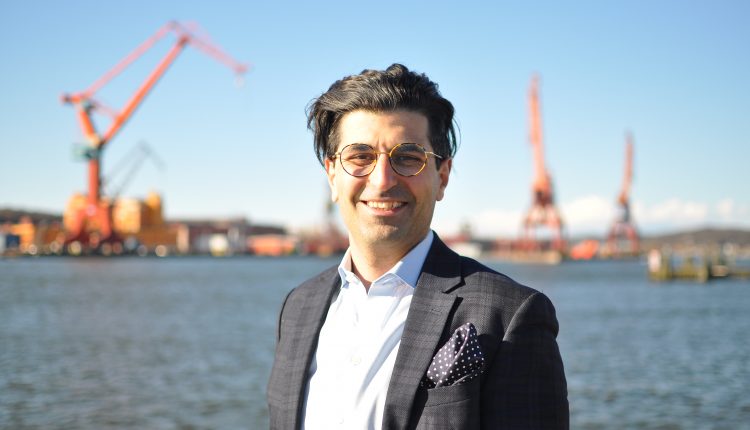 Sam Manaberi is the Founder and CEO of TRINE – a digital crowd-investment platform for profitable solar energy projects, which connects disposable income from private individuals, with local solar companies that are in need of financing, in off-grid areas of Africa. The company’s 18 employees are based across two offices – the HQ and hometown of TRINE – Gothenburg, Sweden, and also in Nairobi, Kenya. Below Sam tells us more about the platform, Sweden’s social welfare system and the positive effects that long holidays have on his employees.

What makes TRINE different to other ethically-minded FinTech platforms available to the general public today?

TRINE is the only platform in the world which focuses solely on crowd-investing for off-grid solar energy projects. Our decision to specialise in off-grid solar – and within this space, small-scale, local instalments in rural areas – comes down to the fact that to properly inform our investors, we need to be the experts at what we offer. When investing in a solar project through TRINE, our investors can follow their money every step of the way, as well as the impact it can have. We believe that our expertise, combined with this level of transparency, is beneficial for everyone involved, and helps our investors reduce the uncertainties surrounding their decision to invest.

There is a growing demand for alternatives to traditional investing, and people are increasingly turning to providers that can help them make a positive impact on society, in addition to a return on investment. What makes this space slightly complicated for people is that it is still relatively new, and the consumer is often wary of how, and where to place their money.

Many investing platforms that label themselves as “ethical” offer several forms of investment, and allow users to invest in a variety of different schemes. While this is not necessarily a bad thing, the wide breadth of options can make it difficult for the investor to understand the specifics of how their money is invested, and the actual implications their investments have on the society.

Does TRINE’s approach to flexible working hours (and the Swedish standard of long summer holidays) have a positive effect on staff productivity? Why would you say this is?

A strong company is one where everyone who is there actually wants to be there. We believe in assuming the best in people and from my experience they tend to exceed our expectations. For us, it’s never been important how many hours (or where) you work, but to get things done and make sure we reach our targets. It’s more important that everyone works in a way that suits them, rather than having rigid structures for all, that might only suit a few. As a company, I strongly believe we should enable people to be the best version of themselves, and that includes the freedom to choose your own way of working.

Companies in Sweden have to follow something called ‘Semesterlagen’ (The Annual Leave Act) – a government law that gives employees the right to a minimum of four weeks of holiday in a row during the summer. Not all employees wish to take annual leave for this long, but we do encourage our team to take long holidays as a way to wind down, and to focus on other aspects of their lives. Allowing for longer holidays has had nothing but positive effects on our team’s productivity.

To what extent have your leadership roles and responsibilities varied between the different countries you’ve had experience working in?

My specific roles and responsibilities have always changed, considering the targets of the position between the countries of deployment. Working in a large corporation in the US meant that many things were readily available and often for granted. Most of the energy goes into modifying and improving existing processes. In a start-up, there is literally nothing to start with, it is all about innovation which requires much energy at the same time as you have nearly no resources.

It has been fascinating to learn the differences between the countries, primarily driven from cultural aspects, at the same time as experiencing the vast similarities that are just human nature.

As a Swedish company, what has been the key to making TRINE a success outside your home country?

Most companies from smaller countries would agree that in order to see your business succeed at all, you have to create a product or service that can have impact across multiple countries and markets. Having this mind set from the beginning has definitely sped up our growth outside Sweden.

We built the platform with an international audience in mind, and it was always important for us not to complicate things, but to create a product that would be easy to use for anyone, anywhere. With the low threshold of €25 as the minimum amount for investing in a solar energy through TRINE, people from all walks of life have been getting involved from the get-go.

Fortunately for us, we have also seen a significant rise in Millennials wanting to invest manageable portions of their disposable income in ways that also have a positive impact on society. This attitude to investing is not exclusive to Swedish Millennials, but something that is happening globally. With Millennials surpassing Baby Boomers as the largest generation in several countries, including the US, this group of consumers has naturally contributed to the rising trend of ethical investing.

In your opinion, what makes Sweden one of the largest exporters of successful business concepts?

One thing that all Swedes benefit from is the safety net of our social welfare system. Free education, high-quality healthcare, and strong support-functions for those in unemployment, give people the freedom to take risks and try new things. Having this safe space for experimentation and innovation has fostered some great ideas.

Having returned to Sweden after working in Germany and the US for a couple of years, I took some time off for parental leave with my son. This gave me time to reflect over whether I wanted to return to full-time employment, or start building a company of my own. Considering the risks associated with starting a business in Sweden, I knew that if it didn’t work out for some reason, society would have my back. I soon realised that the worst thing that could happen was that I missed out on a few months of salary, and I decided to take the risk. This decision brought me to founding TRINE, and though it worked out really well for me, I am fully aware that taking a risk like this is simply not an option in many other countries.

When it comes to the more recent Swedish company success stories, I believe that a key factor has been that the general public in Sweden was encouraged to embrace technology long before many other countries. Back in the 90s, the Swedish government initiated a big push into educating people about computing and IT. As a teenager, I was learning how to code on a government-subsidised computer, and just like mine, many families could afford to have a computer in their home with this help from the powers that be.

Fostering this generation of tech-savvy kids, but also encouraging companies to go digital early on, put Sweden ahead of the game in terms of innovation, and many of our country’s international tech success stories are absolutely a result of this.

What could businesses in other countries learn from TRINE and Sweden’s example?

Most organisations in Sweden are set up horizontally as flat hierarchies, with few layers of management between teams, the top management and CEO. The benefit of this organisational structure is that it tends to speed up decision-making, improve communication, and encourage the workforce into taking more responsibility.

I think CEOs and company founders around the world could learn a lot from this particular aspect of the Swedish leadership style. It is impossible for any business leader to always be the most knowledgeable person in the room, and working closely with the team creates a greater level of support both ways.

At TRINE, we trust employees to make decisions and allow them to get on with their jobs without unnecessary levels of reporting to several rungs of management. My whole team consists of super-talented and knowledgeable people, and working closely together means that we can bounce ideas off each other and turn to one another for advice.

It would make no sense hiring people who aren’t intelligent, skilled, and capable of doing the job that you need them to do. It would make even less sense not to appreciate and make use of their qualities once you’ve managed to employ them.

Finally, I think more companies should allow their employees more flexibility to do their jobs where and whenever suits them best. However, it’s impossible to make it work if your employees don’t like their jobs, and if they don’t share the same vision for where to move forward.

As a business leader, it is really up to you to make sure that every single person in your company feels involved in your company’s journey. Once they do, you can trust them to perform just as well from any place, at any time, as they would tied to their office desks between nine to five.