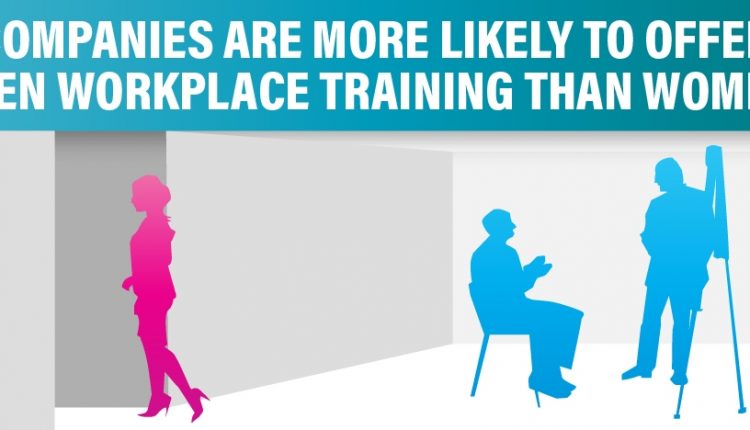 With an equal number of women entering the workforce as men, you may think that cracks are starting to form in the proverbial glass ceiling. However, recent research by Theknowledgeacademy.com has revealed the limitations women still face in their professional careers; namely a lack of workplace training offered by their employers.

The Knowledge Academy has consulted data from Eurostat, the statistical office of the European Union, alongside a survey of over 6,000 adults conducted by the UK Commission for Employment and Skills (UKCES) and the National Institute of Adult Continuing Education (NIACE.)

Findings have exposed that employers are 18% more likely to sponsor job-focused training for a man than for a woman.

Looking at 32 EU countries, including the UK, the study showed that on average almost 8 in 10 men are offered workplace training, paid for by their employer, compared to only 6 in 10 women. Furthermore, UKCES has revealed that even when trained, men were more likely to receive a pay rise thanks to the skills they learned.

The Knowledge Academy found that this was in part due to the type of training offered to each gender. Men were more likely to undergo supervisory training to help them become better leaders and managers. In contrast, women were offered courses on equality and diversity training (39% of women of women questioned had received this sort of training, compared to 24% of men) or health and safety training (61% of women, compared to 52% of men).

This is despite women stating that they were more likely to identify that the skills they needed were more job-focused, specifically in IT and numeracy.

The EU countries that had the largest disparity in employer-sponsored training for men and women were as follows:

As a consequence of this lack of sponsorship, women are more likely to have contributed towards the costs of their training than men, revealing a desire to advance in the workplace.

What does this mean for women’s professional progression?

Investment in learning and skills development can bring considerable benefits, both to the individual and the business in which they are employed. Reported outcomes of training include a more skilled, confident, satisfied and loyal workforce. Over 80% of those studying for their line of work reported positive outcomes.

Results from the survey conducted by NIACE and UKCES, have shown that 61% of respondents felt it necessary to improve their skills to support their career. With such importance placed on adult education, it is a tragedy that women are not offered the same opportunities as their male counterparts. This is especially true when you consider that employees learning for work- related reasons were significantly more likely to have gained a new job or been promoted in the last 5 years (54% and 33% respectively), as well as to aim for a better job or promotion in the next 5 (64% and 44% respectively).

Why are women left behind?

Unfortunately, the answer to this seems to reside in the difficulty transitioning back into the workplace after bearing children.

Women are significantly more likely than men to work part-time (44% and 13% respectively), especially after becoming mothers, unfortunately resulting in a lack of training opportunities. According to research, those working full-time were more likely than their part-time colleagues to have access to employer-provided training. 32% of full-time staff had accessed both on-the- job and off-the-job training in the previous 12 months, whereas only 19% of part-time staff had done so.

On the results, Dr Fiona Aldridge, Assistant Director for Development and Research at NIACE has stated the following: “The differences we have found between training provision for men and women reflect wider issues within the workplace when it comes to gender inequality. Advancements in flexible working have helped to ensure that there are now a record number of women in work, but this flexibility is often accompanied by a hidden pay penalty: the hourly pay difference between full-time and part-time workers is currently 25%. Women are also much more likely than men to be found in low paid sectors such as retail, hospitality and social care.”

Most Recent
By CEO Today On Nov 6, 2017
DiversityEmploymentEqualityMenTrainingWomenWork
Share FacebookTwitterGoogle+EmailPinterestLinkedinTumblr