Are You Sick of City Congestion Slowing Down Your Business Logistics? 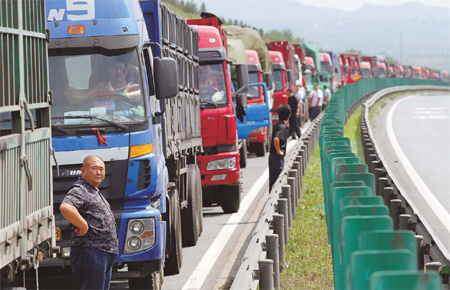 Getting your goods from A to B seems like a simple feat, but in reality, between time scheduling and traffic, the logistics do require some solutions. Stuart Miller, Co-founder and CEO of ByBox, below talks about the potential of lockers, just like Amazon’s, on a large scale for businesses.

Congestion and carbon emissions are on the agenda for all developed governments around the world. City centres are slowing to a halt from the increase in traffic. Relying on a same-day delivery vehicle to complete the delivery of an urgent part is already stressful; soon it will be laughable and probably illegal. But what’s the alternative? It’s arguable that the only way to reduce congestion is by having fewer cars on the road during the day. Meaning items would need to be delivered at night which in reality, whether stock or consumer parcels, isn’t inherently easy. Getting vehicles on the road in the night may be, but where would these vehicles deliver to? For ByBox, the answer is lockers. Lockers are the catalyst for through-the-night delivery, they are accessible 24/7 and allow for consolidated deliveries, reducing not just congestion but emissions too.

Lockers aren’t only an optimal solution for ad-hoc delivery. As a nation, we are increasingly dependent on technology and equally intolerant of failure. And if equipment does fail, we demand it to be fixed immediately. By using lockers for dynamic positioning of critical inventory at night, companies can be sure the parts they need are in reasonable distance to where they need them. So when a retail card machine goes down on a busy Saturday, the part needed can simply be retrieved from a nearby locker instead of sent out on a van to be delivered same day.

Congestion is only going to get worse, not better. We are seeing continual increase in the number of online orders placed, orders which are delivered to the workplace as individuals aren’t at home during the day. It’s no surprise then that our city centres are chronically clogged. As companies, we have a responsibility to not only deliver a better, more reliable service to our customers but also to reduce vehicles contributing to congestion and carbon emissions. At ByBox this is through our locker network and solutions like Metro™ and Switch, services specifically aimed at increasing efficiencies, dynamic positioning of parts and reducing congestion in major cities such as London.

Most Recent
By CEO Today On Aug 10, 2017
CityCongestionDeliveriesLogisticsLondonMotoringsolutionTraffic
Share FacebookTwitterGoogle+EmailPinterestLinkedinTumblr